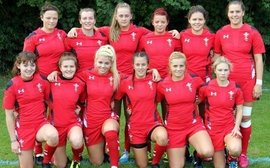 Pictured are the Wales Under 18 Girls side which finished as runners-up in Sweden.

The massive strides Wales Under 18 Girls have made under the guidance of Rhys Edwards and Richie Pugh was fully illustrated when they finished runners-up to England in last weekend's Rugby Europe Under 18 tournament in Enkoping, Sweden.

England, who Wales also lost to in the final, proved a class apart and won 43-0 in the opening pool match but Hannah Jones' side bounced back to win their remaining games on day one by beating Portugal (17-5) and Ireland (12-5).

Wales began Sunday in fine fettle by defeating hosts Sweden 22-7 to ease through to the semi-finals where the strong Netherlands side had no answer to the pace and guile of Wales who ran out 26-5 winners.

England confirmed their status as the team to beat in the final when they recorded a 54-0 win against Wales but head coach Rhys Edwards was still of praise for his side who performed above expectations.

"The girls really stepped up for the tournament," he said. "The UK Games were a week before and in between that tournament and this one in Sweden, they responded well to the monitoring. Elli Norkett performed well while scrum half Keira Bevan looks a promising prospect.

"The best performance was against the Netherlands in the semi-finals where we smashed them."

Team manager Daryl Morgan, added: "The girls showed the commitment and ability we knew they possessed all along. Two players - Samantha Morris and Emma Hennessy - stepped up to the squad from the School games B squad, and both made significant contributions to the success of the weekend.

"With the performances of the players who represented their country last weekend and the up and coming players who have already been identified through our development programmes, there is a great deal of optimism around women's and girl's rugby in Wales at the moment."

Any player between the ages of 16-30 is welcome to attend the WRU Talent ID Day at the National Centre of Excellence on Saturday 27th September 2014.