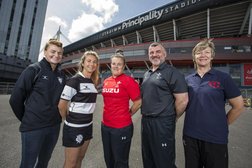 On Saturday 23 November they will play a first female Crawshay’s side followed by the eagerly awaited double-header fixture against the Barbarians at Principality Stadium (November 30).

Two former Wales Women captains Rachel Taylor and Liza Burgess have been handed coaching roles for the Barbarians and Crawshay's respectively. The pair, who have 129 Wales caps between them, will link up as Crawshay’s coaches before Taylor takes over from Burgess as Women’s Barbarians forwards coach for this match.

Wales Women will kick off their international season with an away fixture against Spain on November 2 with two further away matches set to be announced for November.

Phillips believes it’s time for the side to improve its consistency and winning mentality with the Women’s Rugby World Cup in two years’ time (New Zealand 2021) and feels this autumn programme will help achieve those aims.