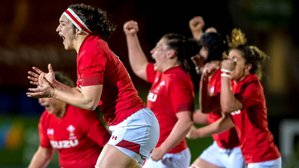 The venue will stage international rugby union for the first time as Wales finish their 2020 campaign.

The fixture was originally scheduled to take place at Cardiff Arms Park in March but was postponed due to the outbreak of coronavirus.

Wales have moved the game from Cardiff Arms Park because it has been used in the fight against Covid-19.

Wales will aim to finish their campaign on a high after defeats against Italy, Ireland, France and England with interim head coach Darren Edwards taking charge for the first time.

Siwan Lillicrap retains the captaincy which she held throughout the championship and since November last year.

"We didn't get the results we wanted for the first four games, but this is our opportunity to prove a point," Lillicrap said.

"It's also a chance to show what hard work we've put in over lockdown.

"This is the restart now and a big 12 months ahead for us.

"If we can do well in this fixture it will really drive our standards forwards and also help out team confidence which is a huge thing."