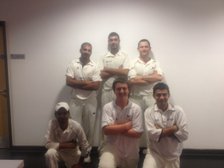 Nondies Indoor team continued their run to the title by beating Tiddington on the basis of losing fewer wickets after both teams scored 95.

The Nondies Indoor team’s season continues to go from strength to strength as they took the points against a strong Tiddington side. Nondies are surely now real title contenders and within just 2 points of the leaders with 2 games to play.

The team made just one change from last week with Chris Day dropping out having tripped up over his moustache and Adamson stepping back in. Rattigan was also mysteriously unavailable though there were sightings of him at Bletchington Towers in meetings with senior committee members. A number of rumours persist about dressing room bust ups, contract negotiations or a muted big money bid from a Division 1 side although he may have simply had to attend a meeting of the Social Club in his dual club role as opening batsman and treasurer.

The game started in confusion as the start time had been brought forward. Skipper Adamson still hadn’t arrived so the triumvirate of Zia Hamid, Bilal Ali and Kamran Ahmed managed the toss and agreed the batting order between them. There were no surprises when the top 3 were listed as Hamid, Ali, Ahmed. Many eyebrows were raised at the promotion of Kamran to number 3 with his previous run rate being pedestrian at best or 'snail like' more accurately.

Nondies batted first and against some decent bowling struggled to get into rhythm. Bilal Ali looked good for a few balls but was bowled by a decent slower ball yorker. Zia similarly started quickly with a six to silly mid on but he too was undone by the yorker.

As usual Joe Butler played a steady but necessary innings and top scored with 15.

Some wayward bowling towards the end of the innings that meant Nondies were able to post a respectable total of 95 for 4 with over 50 extras.
Tiddington’s batsman started cagily with some tight bowling from Kamran. But Zia soon put paid to that with his obligatory selection of leg side wides allowing Tiddy to get their score motoring. Nondies fielded well in general and managed to effect a number of run outs but Tiddington moved towards their total steadily.

With 2 overs remaining they required 25 to win with 3 wickets remaining and with the reliable Toukeer Ahemd to bowl the penultimate over confidence was high amongst Nondies fans. However, Toukeer was still arguing with the umpire about a controversial run out decision from the previous over when he bowled his first ball and completely lost his head (as did the Tiddington batsman almost did). The first ball was a head high beamer resulting in 4 extras and this was followed by an over of what Mike Atherton would probably describe as ‘filth’ with 20 runs (but with an important run out) coming from it. Tiddington were now clear favourites needing only 5 to win from the final over but after some tight bowling from Kamram 3 runs were still required from the final delivery. The ball was played to Zia at silly mid on who swooped on it sloth like but missed the run out allowing Tiddington 2 runs to tie the scores. There was confusion in the hall about what a tie meant but after checking the rules it was clear that Nondies had secured the win based on losing 1 fewer wicket.

The lads take on Oxenford next week as they look to continue their winning run and push for the title.

The start time is 9.20pm for those looking to attend. With interest now high it has been advised that fans get there early to secure their seats.