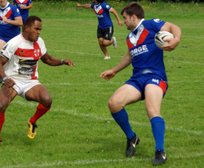 Oxford Cavaliers welcome Swindon St George to Hinksey on Saturday, for what promises to be an exciting and hard fought local derby, with plenty to play for.

Having lost in their last outing to table-toppers Somerset Vikings, the Cavaliers must now look to this game to put their season back on track with just a couple of fixtures to play. “We need the win”, said Cavaliers captain John Connaughton. It’s as simple as that.”

“To have gone top of the table and then not do what we needed to last week was disappointing. But we’re not done yet, and we firmly believe we can get a win Saturday, and still end this season on a high.”

Swindon, who themselves have struggled for form this campaign will be seeking revenge for a 40-24 home loss at the hands of the Cavaliers just a few weeks ago. But they’ll have to do it without their captain and talisman Mike “Tommo” Thompson who suffered a severe shoulder injury in that home fixture against the Cavaliers.

Oxford, will again miss the influence of skipper Connaughton, whose injury hit season continued when he limped out of the game against Somerset at the weekend. They could though welcome back centre Chris Fehr, and with 10 try Jack Briggs in scintillating form, will be confident they can claim the victory they need to take them back to the summit of the Rugby League Conference West of England Division.