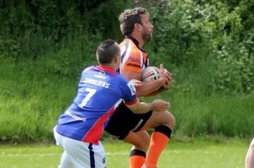 In a nail-biter at Oxford Brookes, play-off chasing Torfaen fells to a shock defeat to the side who were propping up the league at the start of the day.

The Tigers were missing over 10 first choice players including the whole of their back-line and it showed after they were 26-0 down in 35 minutes with Harry Kuffman scoring in the fourth minute with Dan Brooker converting.

Brooker added two tries of his own with Connor McCaffery and Simon Price also crossing and Brooker adding two more goals before Joe Leadley finally replied with a try and goal for the Tigers just before the break to give them hope.

Brooker’s hat-trick try from the second half kick-off looked to signal another rout in the second half but that was far from the truth. Tigers not only fought back but ended up taking the lead.

Ash Goode scored on 45 minutes with Jake Thomas adding another ten minutes later. Leadley coverted both to bring the score back to 30-18.

Dan Jamieson’s try for Oxford extended their lead to 34-18 before the, almost, miracle happened when three tries in 11 minutes for Torfaen turned the game on its head.

Craig Price was first over, Jamie Williams followed him and finally Jamie Thomas. Leadley kept up his 100% record with the boot and Torfaen, with seven minutes to go, had a two point lead.

However with three minutes left on the clock, the Tigers’ hearts were broken and play-off hopes were dented after Josh Webb gave Oxford the lead back with Brooker adding another goal to seal the win.