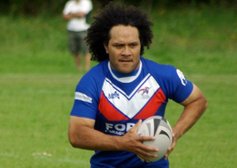 Cavaliers held off a committed Swindon side on Saturday to record a 50-32 win that takes them back to the top of the RLC West of England Division.

Swindon were in touch with their hosts for much of the game but a try just before the break from Barry Llewellyn and two immediately after it from Jack Briggs just gave Oxford enough breathing space.

Carl Baker got St George off to a perfect start with a try converted by James Slatter but two quick tries from the home side from Chris Stables and Johnny Morris edged them in front. It was nip and tuck coming up to the break with Swindon just ahead thanks to converted tries from Jo Lauvanua and Tomtom Turagabeci with an unconverted try from Oxford in reply.

Then came the telling burst. The Cavaliers crossed from the last play of the half and then scored straight from the resumption. A third try immediately afterwards from Tevita Vaikona saw them 34-18 ahead. However, Swindon bravely closed the gap again through Charlie Cox and Kim Vuadreu, Slatter adding a goal and a try in response to the Cavaliers’ seventh score of the game.

The home side sealed the points with two late tries from Briggs who completed his hat-trick and Matt Fiander to leave them needing to win their final game to secure a place in the play-offs.

After the game, Oxford Chairman and Club Captain John Connaughton said: "We have probably secured our place in the play-offs now. But we want to finish the season strongly at home to Gloucestershire Warriors and ensure we finish top of the league."

The Cavaliers take on the Warriors at Oxford RFC, North Hinksey on Saturday 4 August at 2.30pm A win would see the club top the league. Don't miss it!