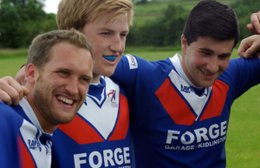 Cavaliers clinch the RLC West of England division Minor Premiership and home advantage in the Grand Final with victory over Gloucestershire Warriors.

Their 56-28 win over the Warriors at North Hinksey saw hat-tricks from the prolific Jack Briggs and Johnny Morris, with Shane Turner adding seven goals.

Ruari Lynch opened the scoring, with a smart fourth minute try for the Cavaliers, but the Warriors were soon on level terms through Zac France. Johnny Morris and Jack Briggs then crossed with Shane Turner converting both to ease Oxford out to a healthy lead, before Gloucestershire made sure there was still something to play for in the second half, with a late try next to the posts.

Oxford took a slender 18-14 lead into the break after the Warriors had come back from 18-4 down. And as the Cavaliers started the second period strongly with Ben Sydenham crashing over under the posts, and Briggs grabbing his second, a try from Matt Patching goaled by Carlo Colucci kept the Warriors in touch.

Three tries in a ten minute spell midway through the second half from Morris (2) and Matt Fiander seemed then to have the game won, but back came the Warriors once more, and two unconverted tries cut the margin to 46-28 with just ten minutes to go.

Oxford though steadied themselves and finished strongly with two further scores, Briggs notching his 16th of an incredible season, and Matt Collings going over to complete a memorable day for the Cavaliers, and send them through to the Grand Final.

Elsewhere in the division, Somerset Vikings earned a hard-fought 30-10 win over an off-colour Bristol Sonics side to leapfrog their opponents in the table and set up a rematch in Bridgwater (Sat 11 Aug) for a place in the Grand Final against the Cavaliers on Sunday 19 August.

The Vikings were made to work hard, but were always in control after establishing an early 10-0 lead. And though Joe Singleton pulled a try back for the Sonics, the Vikings kept the scoreboard ticking over. Will Tobin’s converted try a mere consolation for the Sonics.