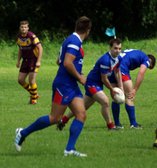 Oxford Cavaliers got their faltering season back on track with an impressive 60-10 win against Bristol that takes them top of the RLC West.

After a stop-start first half of the campaign, the Cavaliers finally found top gear and made Bristol pay heavily for some basic errors straight from the kick off, wing man John Treacy racing over for the first of two tries after just five minutes.

And with returning skipper and halfback John Connaughton pulling the strings in midfield, Oxford made the most of their superior possession in the opening quarter with the prolific Jack Briggs scoring a quick hat trick of tries, and big prop James Smith grabbing his first of the year. Briggs converted three from four to put the Cavaliers 26-0 up, before Jonno Da Silva and Ben Boddinham all but ended Bristol’s hopes with further scores before half time.

Oxford’s blistering start meant the game was all but up for the Sonics by the break, and so it was a surprise when at the beginning of the second half, they scored first through centre Ben Pullen to make it 36-4. The teams then exchanged tries, Treacy crossing for his second and Bristol crashing over next to the posts.

The comeback didn’t last however and as Bristol tired the Cavaliers piled on the pressure, scoring 20 unanswered points. Jonno Da Silva getting his second, Briggs his fourth, and both Tom O’Reilly and Mario Da Silva scoring to complete a famous victory.

“To win today was extremely important. We’re not getting carried away, and there are still things to work on. But to score 60 points against a strong Bristol side is a good sign we’re on track”, said Cavaliers coach Tevita Vaikona after the game.

The win takes Oxford top of the Rugby League Conference West of England Division on points difference, with a game in hand.

The Cavaliers are next in action Saturday 14th July at Somerset Vikings.