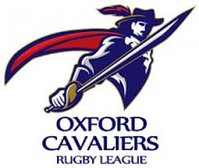 Oxford Cavaliers return to the West of England league

The West of England Rugby League has doubled in size ahead of 2016 with the addition of five new teams to the division.

Gloucestershire Warriors and Oxford Cavaliers both return to the league after respective spells in the Conference League South and they are joined by newcomers Forest Bulldogs who played a number of friendlies last year and will be tasting competitive Rugby League action for the first time in 2016.

The line-up is completed by Southampton Spitfires and US Portsmouth Seahawks who have joined from the Southern Leagues.

The increase in teams has led to a new format being introduced with the teams splitting initially into two groups of five, before coming together for crossover fixtures and play offs, leading to a double Grand Final.

There will be no change in the South West League, with Cornish Rebels, Exeter Centurions, Devon Sharks, Plymouth Titans and North Devon Raiders all set to battle it out for honours again in 2016.

Both campaigns will be opened with a Nines Event.

The South West Nines will take place at Exeter University on Sunday 1 May 2016.

The West of England season starts on the following weekend with the second annual West of England Nines, which again will be hosted by Swindon St George on Saturday 7th May 2016.