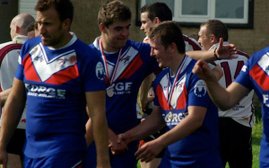 Oxford took the Rugby League Conference West of England title on Sunday with a 58-54 victory over Somerset Vikings in the Grand Final.

In searing temperatures at North Hinksey, Oxford started positively when Jack Briggs found a big hole out wide in the Vikings defence and raced 60 metres to open the scoring after just five minutes. But it took the introduction of Cavaliers coach and Super League Grand Final winner Tevita Vaikona to spark the home side back into life as they twice had to overcome a ten point deficit.

Centre Briggs went on to add a further three tries to his impressive season tally, and Vaikona, playing at loose forward, crossed for a hat-trick as the sides shared 21 touchdowns in front of a sun-baked crowd who were treated to a pulsating game of rugby league.

Having conceded the first score, the Vikings pack worked hard to get the visitors on the front foot and they looked good value for their 18-4 lead on the 20 minute mark. Tries from Mark Sheridan and two close-range efforts from Craig Williams all converted by Dan Hinton looked to have the Vikings on their way to their third win over the Cavaliers this season.

But when second row Craig Boyce suffered a nasty cut to the face the introduction of former Bradford Bulls star Vaikona from the bench swung the momentum Oxford’s way. The big Tongan carryied the ball strongly, spinning out of a tackle to score shortly after coming into the action, before Jonny Morris blasted through the middle of the Somerset defensive line to score under the posts. Chris Stables then ignored a four-man overlap to score himself, and Briggs completed the turnaround taking a fine pass from Vaikona to score and give the Cavaliers a 24-18 lead.

Just before the break, Vikings’ Stan Mortenson forced his way over in the corner to cut the gap to just two points at the interval and the scoring restarted immediately on the resumption with Matt Collings touching down in the corner to extend the Cavaliers’ lead to 28-22. Williams picked up his third try to keep the Vikings in touch but Vaikona showed great feet, creating a gap for himself to score and extend the lead to eight points at 34-26.

Cavaliers looked good for the win now, with the temperature taking its toll on the travelling team. But it was when tempers boiled over that Oxford allowed Somerset a route back into the game, with wing man Jonno Da Silva’s ill-discipline seeing him sin binned on the hour mark. The Vikings wasted no time in seizing the advantage, scoring three converted tries as their hosts struggled to compete a man down. John Ferguson and Joe Bussell both crossed straight from tap penalties and Sheridan went over for his second to turn the heat up on Oxford and put the Vikings 44-34 in front.

But the Cavaliers found something in the tank, and came roaring back when Briggs again ran a good line off his coach to score and halt the Vikings bandwagon with just 15 minutes left on the clock. Back to a full complement soon after, they proceeded to build a match-winning lead. Mario Da Silva showing his agility to dodge three or four tacklers and score, before Vaikona completed his hat-trick and then gave Briggs his fourth with another well-timed pass. Stables brought his tally to five goals and Morris added the final goal for the Cavaliers.

That seemed to be that but the home side had to endure a hectic last few minutes as first Bussell and then Ferguson kept the Vikings slender hopes alive. But time ran out on them and the Cavaliers were able to lift their first league title in their 16 year history.

The Cavaliers would like to thank our players, coaching staff, and sponsors, including Forge Garage, DS Accountancy, The Talkhouse, Electrical Living and Four Seasons Cleaning Company.