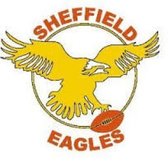 The Cavaliers were on the wrong end of an 80-18 scoreline yesterday. The game started brightly with Myke Dale once again scoring with his first touch after Sheffield failed to deal with a 6th tackle kick. From the regained possession the ball was fed to Dale who crossed to give the visitors an early lead. Jim Rowden added the extras making it 6-0 to the Cavaliers.

Sheffield replied straight away and the huge size difference coupled with explosive power and pace proved to be too much for the Oxford Defence to deal with at times as the home side ran in several unanswered try's before half time giving them a 40-6 lead. The Cavaliers did not help themselves either as the 9-0 penalty count coupled with several drop balls meant the Eagles were the fresher of the two side going into the half.

The second half was much brighter for the Cavaliers as Wes Newton twice broke the line to score with Rowden adding the extras both times. Despite these two scores the game ended 80-18 and the Cavaliers know they have a lot to work on before the away trip to Leicester in a few weeks.

Game Breaker: The Cavaliers inability to hold the ball and too many penalties which gave Sheffield great field position time and time again allowing them to score easily.