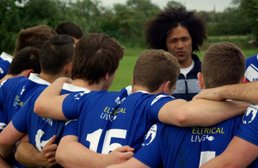 A hat-trick from Somerset player-coach Chris Richards sees the Vikings to a 39-30 win and completes a Somerset league double over the Cavaliers.

In a game where the lead changed hands six times, the Cavaliers took a narrow lead into the break but faded towards the end for the Vikings to get home.

Richards had opened the scoring for the home side before Tom Waterfield replied for Oxford, Chris Stables’ goal edging them ahead. Brian Webb’s try converted by Dan Hinton was then cancelled out by two scores in quick succession from Stables, both goaled by Shane Turner for the Cavaliers.

Mark Lees’ close-range effort pegged the Cavaliers back at the interval and Richards’ second of the day soon after the resumption had the Vikings back in front.

Back came Oxford with the outstanding Jack Briggs’ tenth try of the season, for a two-point lead that was halved by Hinton’s drop goal after some intense Vikings pressure.

Ian Miller then crossed for Turner to give the Cavaliers a 23-30 advantage but the Vikings came home late, scoring three times in the final ten minutes to wrap up the points and clinch top spot from the Cavaliers.

The Cavaliers could not mount a comeback this time and the win was completed by Lee Johnston’s try in the final minute.

“It’s disappointing not to be going home with the win – particularly after the effort we put in”, said Cavaliers coach Tevita Vaikona, after the game. “This is not the first time we’ve let a comfortable lead slip in the last few minutes of a game, and it’s something we’ll need to fix pretty quickly. We play Swindon at home on Saturday, and we’ll be looking to put things right.”