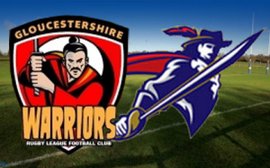 Top Two Face Off in Top of the Table Clash

Oxford Cavaliers look to secure record extending seventh consecutive win, but are wary of Warriors breathing down their necks.

This weekend sees the Cavaliers travel to Stainbridge to take on second placed Gloucestershire Warriors in a game that is sure to test the character of both teams, and provide some insight as to who will be toward the top of the West of England League come playoff time.

A win for Oxford would stretch their unbeaten run to a remarkable seven games, and their lead at the summit of this year’s competition to four points. But a big result for the Warriors could see them leapfrog the current champions into top spot.

All to play for

With so much at stake, it’s no surprise that Oxfords head coach wes newton is keeping his cards close to his chest this week. But he will no doubt share the view of his Gloucestershire Warriors counterpart Steve Lee, who has said that the league is so close this year, “you have to win your home games and look to pick something up on the road. If you have an off day you’ll get turned over”.

Oxford have so far won both home fixtures, against Bristol Sonics and Swindon St George. Having edged a first round thriller against new side Cheltenham Old Pats with a 24-25 win away from home. But the following two games, away to the Warriors and then at home to last season’s runners up Somerset Vikings are sure to test their mettle.

The Warriors have also started the season match up this coming weekend.