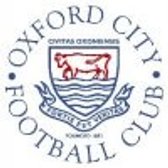 Draw Brings Down Curtain on a Difficult Season

Oxford City shared the points with Bradford Park Avenue in their final Skrill North fixture.
The game saw the final appearances of two fans'-favourites as Steve Basham and Chris Willmott hang up their boots. Good luck to both for the future.
Zac McEachran put City in the lead on 18 minutes after Basham had missed the chance to finish his career with a goal when his spot-kick was saved. Richard Marshall, however, took full advantage from the spot for the visitors with ten minutes remaining to take a share of the points and leave City in the bottom three.