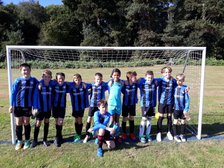 After winning so well last week it was important for the Rockets to continue where they left off and we made a great start. Isaac looked dangerous right from kick-off and his run and shot was saved only for Henry to slot home the rebound for an early lead. Isaac then got in on the act to make it 2-0 inside four minutes. Tunbridge then started to come into the game more and pulled a goal back to make it 2-1. Caden then scored the goal of the game with a strike from either just outside the box or from the halfway line depending on who you ask... (Caden said halfway line btw). That was 3-1 and Dylan's shot could have made it 4-1 but his shot was saved. Knights then caught us on the break to make it 3-2 and then it settled down for a short while. That was all inside a hectic first 10 minutes!

Henry hit the post on 12 minutes, we then had to be solid in defence, Charlie, Ryan and Ali all making good challenges at important times. We continued to press high up the pitch and create chances and secured a hat-trick before half time scoring on 13 minutes and 22 minutes. 5-2 at the break.

Rockets started the second half brightly but it was Aiden who had to make the first save as Ryan's good sliding tackle headed for goal. Isaac continued to break well and was unlucky not to add to his earlier goal; hitting the post. It took just six minutes for Rockets to score again though as Sid made it 6-2. Knights then hit our post before Jake went on a great run putting in a cross that deserved to find a Rocket to hit home but somehow ran wide. Sid made it 7-2 just after 10 minutes and Tyler was unlucky not to add another, forcing a save from the Knights keeper.

Aiden was called upon to save well but it looked like we had handed a way back into the game, literally, as Charlie instinctively three=w out a hand to block in our penalty area. Knights penalty hit the bar and bounced to safety though. Sid got the send hattrick of the match on 18 minutes to extend our lead to 8-2. We then gave away another penalty and again they hit the bar but this time it ricocheted in off Aiden as he dived to save it. With five minutes to go Knights gave a final push and managed to get two goals back but it was never going to be enough with the result ending 8-5 in our favour.

This was another good team performance with all the boys deserving a pat on the back for the effort and for keeping their heads against a niggly opposition who tried their best to pull us back, literally. We will need to cut down on penalties conceded as it gave Knights a way back in, the same as last weeks game, but all the time we are scoring freely we will give ourselves a good chance of winning.