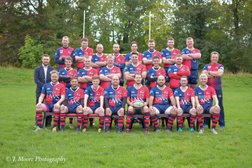 A DETERMINED Wigtownshire could not take advantage of their considerably bigger forwards pack as they were ran ragged by high-flying Paisley.

The Buddies were on the back foot early on against the much bigger visitors and conceded a try inside seven minutes when the Wigtownshire forwards ran in from a tap penalty.
But that was that as far as scores against Grant Sweenie’s men was concerned.
As the visitors tired, Paisley grew in confidence and even got the upper hand in the scrums as the first half progressed – on two occasions steamrolling over the Wigtownshire pack to steal an unlikely scrum turnover.
A penalty on 25 minutes, converted by skipper Ryan McCready, got the scoreboard ticking over for the Buddies and 10 minutes later the hosts scored their first try.
Roared on by a large support, young Matt Johnston chased down a kick and popped a pass to McCready who scored under the posts before adding the conversion.
Ahead at the break, Paisley were confident of winning the game – their seventh in a row – and keeping their promotion hopes alive.
And they dominated the second half pretty much from start to finish, chipping away at the Wigtownshire defence with some neat passing moves and total dominance of the line-outs.
On 69 minutes, a lovely passing move ended with Ben Van Eyssen, Mike Somerville and finally Stef Lach finding Kevin Browne who, running through at full pace, took the offload and powered over the line.
The third try came two minutes later after a brilliant line break by Van Eyssen.
After shrugging off a few tackle attempts, he got support from winger Colin McKay whose pace was too much for the bewildered defence and he scored in the corner.
Prop Van Eyssen said: “We’re really flying at the moment and in a way it’s a pity there’s only one more game of the season to go.
“We’re unbeaten at home in the league and we can still get promoted if we beat Birkmyre in a few weeks.
“Paisley has come on so much as a team this season and we would love to test ourselves at a higher level next year.”
The season-closing Renfrewshire derby against Birkmyre at Anchor kicks off at 3pm on Saturday, April 3.
Share via
FacebookTwitter
https://www.pitchero.com/clubs
Recent news