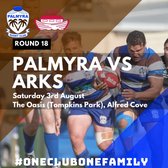 A light hearted Round 18 Preview

There's still time to get your Ladies Day tickets

This Saturday 3rd August sees the Oasis host the final home game of the season and bring the season proper to an end. With Prems, Reserves & Colts all in Finals this should make for an entertaining afternoon of rugby with much at stake. The afternoon also sees host to Ladies Day – a very popular date in the calendar year where Ladies are encouraged to “Dress to Impress” with tickets a very reasonable $50!! If past Ladies Days are anything to go by, this is an occasion not to be missed!

While this is going on, the rugby will be in full swing with all Grades looking to finish the last game of the season with a win before Finals. On pitch No.1 the 3rd Grade side kick off the afternoon with Callum “Sheep” Payne pulling the strings from 10. Former President, Justin Peterson will also be looking to add to his season’s highlight reel with another dominant performance, alongside fellow elder statesman Rob Turner. Rob grabbed himself a meat pie 2 weeks ago against Joondalup and will looking to improve on his season’s impressive tally of 1 so far.

The Colts side travel to Kalamunda this week in their final match of the round and have many State Representatives looking to bring their experience and get the Colts over the line. None more so than winger / centre Caleb Beams. Caleb has impressed this season and has been rewarded with selection in both Reserve & Premier Grade fixtures this season. He may be a current unknown to most but the inside gossip is that in his spare time, he enjoys Sudoku puzzles, craft ales and playing Fortnight online with his pen pal “Zazu” in Mozambique.

In Reserve Grade, coach Jerry Mataceva is frothing at the bit with the thought of a 4-peat on the cards. Jerry’s abilities as a coach and being to achieve the most out of his players is undeniable. However this week there will be questions asked about the inclusion of Hayden Croghan at inside centre where assistant coach Tairi Noema had filled the role amicably during the season when injuries took their toll but has declared himself unavailable for selection this week as he is still recovering from last Saturday. Having intercepted a Bayswater pass around the half-way line he made his way (slowly) towards the try line before being run down by the opposition number 3 about 10 metres later. Fear not though, the average age of Reserve Grade this week is strengthened as returning veteran Hamiora Tioke joins the front row at the vintage age of 42. Gav Armstrong also bolsters the forward pack and captains the side once more. Karl-Henry (Stony) Korjus also returns after a lengthy spell on the sidelines. The thought was he had sustained a shoulder injury earlier in the year but word has been received he was actually overseas auditioning for Estonia’s Got Talent. Stony eventually finished runner up in the prestigious Eastern European TV show to an 8 year old yodeller from Sweden. Unlucky Stony…better luck next year. Coel Linnell gets another start under his belt after suffering a broken nose against Coastal Cavs a few round back. Coel was a late addition to the Pally family this year having spent the earlier part of the year working as a “butler in the buff” (an adult entertainment organisation who specialise in the rental and allocation of hunky young men at functions) – who knows….maybe this guy will be the “Coel” that lights our Ladies Day fire ; )

Closing out the afternoon is the main event on Pitch 1 which sees our 1st Grade team compete with fellow “south of the river” team Arks. The previous meeting was a hotly contested affair that saw Pally go down by just 1 point…causing them to miss out on the Top 6 they so dearly coveted. Since then, however, coaches Jack Lloyd & Darren Reid have rallied the troops and have seen a string of much improved performances and scorelines. Captain Dylan Cunningham will be looking to make amends for his last outing against Arks, where he received a red card for foul play. Having spoken to him earlier this week he has promised to deliver a big performance and drive his team through strongly into final. “The goal now is to finish in that 5th spot. We definitely have the quality of players to make a strong run home and that’s what we’ll be aiming for”. One teammate who never has a strong run home is flanker and co-captain Aaron (T-Rex) McPhee. When referring to Aaron “making a run home” this is usually as a result of his inabilities to consume alcohol responsibly and someone having thrown him in an Uber to get rid of him. Winger Chris Miller will be looking to round off the season strong and add to his try tally for the year. Christened “Horse” by his girlfriend, Miller has been an eye catching talent over the last 2 seasons and has improved impressively throughout the current campaign. With shoulders like a brown snake he seems to always find the gap and come out the other side. His partner on the other side is Trevor “Tarzan” Smith. Tarzan is new to the club this year but has already made significant impact with his on-field performances and try scoring abilities. In a candid one-on-one interview earlier in the week he claimed “This year has been great for me. I’ve really enjoyed my first season playing for The Palms and we definitely want to finish it off strong with a big win at home, before Finals. Once that full time whistle goes though, it’s ON, I’mma be in that shed drinking a beer with the boys, get my coconut scented body oil on and then that’s me….I’mma find my Jane”. Good for you Tarzan, good for you.

Good luck to all involved tomorrow and don’t forget the big Prize Draw after the match where you can win 2 tickets to the Bledisloe Cup game in Perth next week!