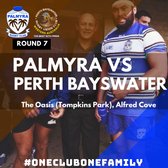 John 'JT' Taylor Cup up for grabs this Saturday

JT played rugby at provincial level for Waikato in NZ and then had an extensive coaching career in NZ, including at provincial level with Marlborough and with the Waitohi Rugby Club in Picton. He proudly wore his Waitohi blazer to rugby functions. He was also a big Waikato Chiefs fan and a Western Force fan (when they weren’t playing the Chiefs!).

After relocating to Perth, JT was instrumental in Perth-Bayswater winning the Premiership in 2007.

Before accepting the role of Head Coach at Palmyra for the 2010/11 seasons, John insisted his wife, Jacqui meet the Committee and check out the club culture because he saw the move as a bigger picture than just his coaching; it was a family commitment. Two of his sons have played in Palmyra colours. He believed in the traditions of the game and was in for the long haul, both on and off the paddock.

John lived and breathed the game of rugby and it seemed that any NZ rugby name that you mentioned, he knew him, played with him or coached him or a relative of his at some point; his network was extensive.

He was quietly spoken and earned respect from those that met him due to his obvious knowledge of the game and mentoring approach to players. JT would see the potential in young players and would be keen to pass on a few tips or provide them an opportunity to advance themselves. He was often at junior or Colts matches, just watching and learning.

Such was his influence on the Palmyra and Perth-Bayswater Rugby Clubs a trophy was named in his honour and the clubs now play for it each time their Premier teams play. Palmyra currently holds the John Taylor “JT” Cup and it will be up for grabs again whenever we play Perth Bayswater