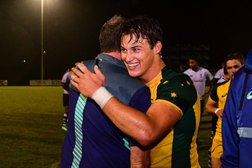 Ireland-born half proud to be in Junior Wallabies' gold

HE may have grown up in Ireland playing gaelic football and golf but Michael McDonald is as proud as any player to be wearing the gold of the Junior Wallabies.

Scrumhalf McDonald captained Australia against Fiji in their Oceania U20 championship clash at Bond University on Tuesday night, kicking the Junior Wallabies to a 16-0 win with a personal haul of 11 points.

While he played some rugby in Ireland, golf was his sporting passion when he arrived in Western Australia with his family about six years ago, aged 13.

"When I first moved out here my handicap was 10," he said.

"I tried my best but I fell away from the individual nature of golf and just love the team sport, especially with a great bunch of lads like these boys, it makes it so much more enjoyable."

McDonald is vying with Henry Robertson - who started in Australia's opening match of the tournament against Japan - for a place in Saturday's Oceania final against New Zealand.

"Everyone's really excited for Saturday and ready to rip in," McDonald said.

"Obviously everyone looks forward to playing against New Zealand, it's going to be a tough test but everyone's geed up for it and building towards the World Cup, that's our main focus."

It's at that world U20 championship in Argentina in June that McDonald will pull on the gold jersey against Ireland as the Junior Wallabies face his former homeland in the pool stage.

But McDonald is now as dinky-di as they come.

"As soon as I jumped the ditch over to Australia, I think that (pride) came straight away," he said.

"We got our citizenship (six months ago) and I've pledged my allegiance here.

"I'm really loving it, it's an absolute honour not only to play for your country but to captain your country.

"It's incredible and it's a once in a lifetime thing and you've just got to enjoy it."

A member of Australia's leadership team, McDonald led the Junior Wallabies against Fiji in what he called a "moment I'll savour forever".

"I even get goosebumps singing the national anthem, it's such a huge honour, especially with such a great bunch of lads."
The axing of the Western Force has not stunted McDonald's growth in the game, with the 19-year-old playmaker making his Rapid Rugby debut just before heading into camp for the Oceania championships.

"West Australian rugby has moved on and that's past us now and we're moving to something good," he said of the Force's Super Rugby axing.

"But there's support through WA. Bob Hunter (CEO) and Steve Anderson (high performance boss) over there have been unbelievable for us ever since the losing of the Force and keeping our development going to get us to this stage.

"I made my Rapid Rugby debut the week before I came (into camp) against the Asia-Pacific Dragons, so that was a great stepping stone coming from there into this and the Oceania games.

"Your legs are hanging out and it's tough but it was a great building block coming into this Oceania tournament."