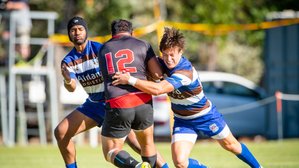 Weekly Round Up - Round 1

This week Pally traveled to the Bull Pen. It’s a wonderful place filled with big smiles, bare feet and consistently the biggest players in WA.

With no third grade in sight this year the colts took center stage first up with a solid but unspectacular win over their Kalamunda counterparts. It appears the young team is well into the early stages of adult hood with several of them sporting suspiciously heavy eyelids, pale complexions and breath a Russian mobster would be proud of, only team physio and genuine club man Nick Ward outdoing them in this area. Regardless early season games are a tricky beast and the young Pally men did well to take a 21 – 5 victory. Strong showing from loosies and mad bastards Max Bailey and Jake Pumfrey set the tone with able assistance from the tight forwards led by new Palm tree and Future Force member Connor Trunks.

With third grade out (see - promoted to second grade) and the pigs wallowing in what could only be described as an anthropomorphic realization of a collective midlife crisis in Busselton the Pally Fours set up shop with 9 players. The team including 3 current or former club captains in Justin Peterson, Callum Payne and Rob Turner. That leadership went sorely missing though with the three of them combing for 18 missed tackles, 4 kicks out on the full and 2 intercepts. Fours also welcomed onto the field the second best Rodden in WA and last weeks second grade star Alex Dowling. The final score was quite a bit to slightly less to one of the teams. Man of the Match went to the referee for helping provide a very positive half hour of social rugby thoroughly enjoyed by all involved.

Sticking to the basics, having belief in themselves, taking the shortest route to the try line and sticking to the basics helped Second grade get off the mark with a 59 – 19 win. They also stuck to the basics. With the word latch suspiciously missing from Coach Mataceva’s pre-match talks, basics & belief was the call of the day. Ably led by last years third grade captain and 400-year-old piece of NZ Kauri Shagga McRae, the forward pack ran straight into the fight and laid an excellent platform for the backs to run off. Except for scrum time. That was really really not that great at all possibly even pretty bad at times. Estonian international Karl Henry-Korjus replaced last year’s international 8 Nathan Charles with great aplomb and carried strongly all game. Mid fielder and all-round top bloke Tommy Foster was in the thick of things as usual while the best Rodden in WA provided ghostly running from the back, though the opposition was overheard complaining that tackling a man covered in that much sunscreen was unfair. Special mention to his two outside back counterparts who played two full games, Matt and Caleb.

First grades noted fitness was put to the test against a traditionally large Kalamunda outfit. With Pally chasing the game and still right in the fight, 13-year-old prop Lee Soa was harshly penalized in front of his own posts with only a few minutes remaining. Rumour has it the ref simply couldn’t comprehend a prop showing up every openside flanker in this fair nation with such perfect technique. Co-Captains Arron McPhee (nephew of Nanny) and Dylan Cunningham (Rottnest native) carried strongly all game. Simple errors and an apparent love of buttery popcorn by the outside backs as a pre-match snack hurt the comeback attempts. Ultimately this is a very young side which will continue to improve far quicker than most other Prem teams. Congratulations to the one-armed Sam Goggins on his debut and also Jack Coffin, Christian Bavadra, Tarzan Smith & Kelan Jones. Pally did well to have the last say and score right on fulltime, but it was unfortunately too little too late. Final Score Kalamunda 17 Palmyra 13.

This weekend sees actions return to The Oasis for the first time in 2019 as we host early competition front runners Nedlands!