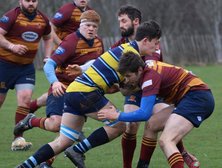 Phew. The rain wasn’t nearly as bad as forecast on Saturday but the wind really played a part in what was a tale of two halves in Falkirk

Falkirk 2nd XV 27 Panmure 29
Phew. The rain wasn’t nearly as bad as forecast on Saturday but the wind really played a part in what was a tale of two halves in Falkirk on Saturday.
Playing with the hill and with the wind on a cold Saturday afternoon we knew it needed a big shift to bring the double back to Broughty Ferry. Having not won in Falkirk for a while the boys were pumped up.
Falkirk kicked into the strong wind, not 10, resulting in a Scrum Halfway to start the game. Scrums being the key word of the day for the Panmure side in what could only be described as a masterclass.
An early penalty kicked deep into the Falkirk 22 and straight from Thursday nights training ground Andy Philp crossed over in the corner. The next little while we set to work moving the ball around. Dominating in the scum and trying our best to keep the Falkirk 8 away from another turn over. Our next visit to their 22 saw Chris Tulloch sneak through the middle of the ruck and score under the posts. Everyone worked hard and before the end of the half we managed a couple more scores. Gordon Gray with a great inside ball to Paddy Marshall who ran it in from around halfway and Iain Anderson crashing over close to the line.
Half time we were in a commanding lead with a dominant scrum. But the wind played a massive part in our success and we knew we’d be up against it in the second half.
The second half showed what great character we have developed as a team. We only crossed the white wash once more in the game with our scrum 5 meters out releasing James Fairlie to crash over from short range. However, Falkirk chucked the kitchen sink at us and looked to sent us back home again with another close margin loss. In what can be described at times as a pile of broken bodies strewn across the pitch we kept at it. And at times it could have gone either way but our work at break down time and the carries from some of our forwards kept us in the game. Special mention to Christy O’Donnell with a try saving tackle in the corner. With no time left on the clock Colin Jeffrey drew a penalty with a great bit of rucking. Ball kicked into touch. Job done.
It was so good to see the rewards of what was a great game of rugby. Everyone in the squad and who has been training over the past few weeks helped push the squad over the line. That was our last away match of the season. As the 2019/20 draws to a close we have three remaining home games at Forthill Community Sports Club:
Saturday 7th March - Madras
Saturday 28th March - DUMS
Saturday 4th April - Carnoustie
Come down and support the lads for the last 3 times this season. It’s been a long shift in which we have learnt a lot but grown closer as a team.
Thank you to G Honeyman for the match photos.
Tries: A Philp (1), C Tulloch (1), P Marshall (1), I Anderson (1) and J Fairlie (1)
Conversions: C Lane (2)
Man of the Match: C Tulloch
Share via
FacebookTwitter
https://www.pitchero.com/clubs
Recent news