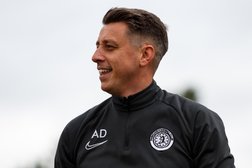 "It’s been a very strange season so far to be honest." - Andy Dawson

First team manager Andy Dawson gives us his thoughts on the season so far, lockdown 2.0, injuries and much more...

Parkgate gaffer Andy Dawson says his side should be higher up the league table but lapses in concentration and conceding too many goals means the Steelmen are currently placed in 10th place, four points off 5th place with a game in hand.

"I think it’s been a very strange season so far to be honest in the 11 games we have played (9 league games and 2 Buildbase FA Vase games).

On one hand, we have been very pleased with the amount of goals scored but also disappointed in the amount we have conceded. This is something the break-in games hopefully allows us to address and I’ve already spoken to a few players who we can hopefully bring in to the club for when play resumes.

We currently sit in 10th place and I genuinely believe if it wasn’t for lapses in concentration we should have five more points on the board from two games in particular that we switched off and let ourselves down which would have put us on 18 points and therefore in 5th place. Unfortunately, we cannot turn the clock back and we just have to work on the things we feel we have been poor at and when we can resume training we can hopefully learn from these mistakes to prevent them happening again."

Dawson and his assistant Lee Whitehead have been forced into many selection headaches within the squad due to injuries and Covid-19 related situations. Dawson went on to add;

"We decided during pre-season to run with a group of 21/22 players, which has turned out to be a good decision. We've had long-term injuries to Bruno Holden (6 weeks), Haydn Ward (4 weeks), Alex Ripppon (5 weeks), Tom Almond (6 weeks) but also a number of other injuries plus the dreaded self isolation issue that has been something we have never had to deal with in previous seasons.

We had 9 players unavailable for the trip away at Winterton and called up two of the lads from the reserves who came in and did very well in fairness to them and they were both rewarded with a place in the squad for the Buildbase FA Vase game that weekend as a result of this. Having a reserve side this season has enabled us to send players for valuable game time when returning to fitness from injuries. This is something (match fitness) that you can’t replicate by just training so this has been pleasing to be able to do so."

People across the football world are used to the game being suspended now after the first lockdown which stopped football back in March so the coaching staff have made sure the players are well equipped to return in the best shape possible next month.

"We had a chat with the lads once we knew that we would be going into lockdown about making sure we maintain our fitness levels during the break. Following the previous lockdown the lads trained twice a week for a long period of time to enable us to be the fittest we possibly could be for the new season and credit to the lads, they worked hard and pushed each other and pleasingly for myself and Lee (Whitehead) they have looked much sharper than they did last season.

This time around in lockdown we have had one of the players who runs his own performance and training business (Mack Collinson) put together a very comprehensive session plan for the lads to complete each week. It’s a 4 week programme consisting of a wide range of fitness and strength exercises to hopefully both maintain players fitness levels but help prevent injuries once we can resume. Each of the lads have downloaded a tracker app and have a specific WhatsApp group for them to post their weekly results, ensuring a bit of healthy competition between them and it ensures they all participate. I’d like to thank Mack again for doing this."

You can follow Collinson Performance & Training on social media. (@collinsonpt)

He went on say, "Although I realise the league had no option to suspend the league upon government advice I do wonder how we are going to get all the games in. We have five games that will be missed during the month lockdown period so if hopefully we can resume in December it may mean five more midweek games to fit in throughout the year. Usually a few games get called off due to weather in a season so again they will need to be fitted in also. Thankfully, I don’t have the job of re-arranging the fixtures."

Dawson wanted to thank Parkgate supporters and volunteers for their support during the first few months of the season.

"On behalf of myself, Lee (Whitehead) and all the players, I’d personally like to thank the supporters and all the volunteers who have continued to support the club during these testing times. We have had a 37% rise in attendances at Roundwood this season, although it's not surprisingly with 38 goals seen in just 6 games at Roundwood and I hope we continue to grow these attendances when we can get back to playing and hopefully the results will come hand in hand with this.”