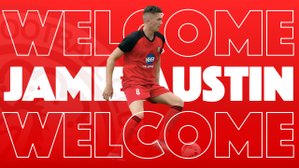 Parkgate have secured the services of attacking midfielder Jamie Austin.

Parkgate Football Club are delighted to announce the signing of highly-rated attacking midfielder Jamie Austin from fellow NCEL side Handsworth.

The 21-year-old returns to Roundwood after a brief spell over two years ago. He has since gone on to play for Worsbrough Bridge Athletic and Handsworth.

Manager, Andy Dawson was quick to show his delight to see Austin join his young squad.

“Jamie is a lad we have been well aware of for a while. He impressed playing against us previously and we have been to watch him a couple of times this year.”

Dawson went on to add, “he is a big strong lad who has an eye for goal and we are delighted to have added him to our squad.”

We managed to get some words off the new-boy this afternoon.

Now you have left Handsworth to join Parkgate, what made your mind up to play your football at Roundwood?

Parkgate is a local football club close to home with nice facilities which suits my playing style and needs. My mind was made up after long thought and various offers but I felt parkgate was best suited not only the team but management as well and I can’t wait to get started.

You know a few of the lads at the club, will this make it easier for you to get settled in?

Knowing a few of the lads already at parkgate has allowed settling in to be a lot easier knowing I’ll be able to communicate with the lads on and off the pitch and just being comfortable with a few of them already will only get better and benefit my attitude positively towards playing for parkgate.

What are your personal ambitions and expectations for you and the team this season?

With playing in a more advanced attacking role which I believe suits me more as a player will only enhance my ambitions of scoring and creating goals. My ambitions are to increase my game time and secure my shirt in the squad but also playing effectively amongst the team to win games.