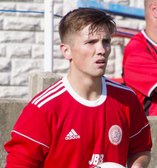 New signing Jed McGowan speaks about his move to Parkgate for the first time.

Q // You’ve rejoined Parkgate after many successful years at NCEL Premier League side Maltby Main, what made you come back to Roundwood?

The manager basically. I’ve known him quite some time and when we spoke, I bought into the plan he has for Parkgate and they have such a great set up and pitch which I can’t wait to play on again.

Q // You and the Manager, Scott Mason, know each other well from previous clubs. What’s he like to play under and are you excited to be back playing for him?

Yes, I’ve known him a while, he is a good lad and knows how to bring the lads together. We’ve always had a good dressing room in the teams I’ve been in with him and we have done well, so hopefully will do again.

Q // You’re known for great versatility, playing both in defence and midfield, what is your preferred position and are you hoping to play there more often for the Steelmen?

Well, I’ve predominantly played right back or wing back, I honestly don’t mind but I prefer to get forward as much as I can as I believe I can have more of an impact.

Well I have only played a few games but from what I have seen there are already a number of good young players here and I would say we are only a few players away from having a squad capable of climbing up the league.

Picture: Jed McGowan playing for Parkgate in 2017 before a move to Maltby Main.