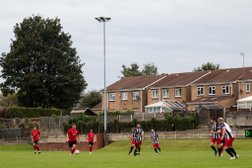 The coronavirus stops all football for the foreseeable future.

On the 13th March, the Toolstation Northern Counties East Football League announced that all Premier Division, Division One and League Cup fixtures are postponed for the foreseeable future, until next updated, due to the outbreak of COVID-19.

"After careful consideration, the management board of the Toolstation NCEL has decided to postpone all scheduled Premier Division, Division One and League Cup matches with immediate effect.

This decision has not been taken lightly but the health and well-being of all of our players, team officials, volunteers and supporters is of paramount importance.

The Board will continue to monitor the Coronavirus situation whilst taking advice from the Government and the FA and will issue further updates as necessary.

A date for the resumption of fixtures will be announced as soon as it is considered safe to do so.

We hope everyone will understand the reasoning behind this decision and thank you for your co-operation."

The FA have also announced that all Grassroots games are postponed, which will affect the Steelmen's youth teams. The English FA and SHCFA will update everyone on the situation when it develops.