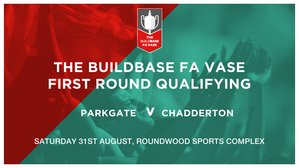 Parkgate host Chadderton for the second year running in the FA Vase first qualifying round.

The Steelmen face Chadderton in the first qualifying round for the FA Vase Cup on Saturday the 31st August.

The tie offers a welcome break from league action and the chance for Andy Dawson and his staff to maybe look at other players who haven’t been given much chance so far.

The opposition, Chadderton, play in the North West Counties League Division League One. They will be making the trip from Oldham on the back of a 4-3 defeat in the league.

Parkgate however will be full of confidence after ending Retford FC’s unbeaten run last Saturday. A strong defensive display again helped the boys to a 2-1 win after Bagley bundled in the winner. A good cup run is seen as good both for team morale but also good for the club financially, this is something all will be aware of ahead of the game.