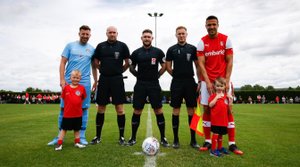 A record crowd of 1536 watch pre-season opener between The Steelmen and The Millers.

A record crowd of 1536 was at Roundwood soaking up the heat and the action that was taking place between The Steelmen and The Millers. The atmosphere around the ground echoed the friendly relationship between the two clubs as the fans witnessed Rotherham hit seven past Parkgate who gave their all, but the football league side showed their quality throughout.

After a slight delay to kick-off due to the queues to get in to the stadium, Rotherham took the lead after 7 minutes when Kayode scored from close range. Parkgate did well to hold off Rotherham and showed heart and will as the players looked to impress manager Andy Dawson before the start of the new season. Despite their efforts Crookes added a second in the 20th minute, followed by a lovely strike by Michael Smith in the 29th minute to make it 3-0. The Steelmen showed their own piece of quality in the 33rd minute when a good period of possession led to a chance for Lewis Whitaker who dragged his shot wide. Crookes grabbed another goal just before the half-time whistle to make it 4-0.

After a quick team swap by Paul Warne’s Rotherham at half-time, the second half got underway in the summer time heat. Parkgate keeper Chris Butt made one of many good saves to prevent Ben Wiles in the 47th minute. After another period of brave defending from the Parkgate team, Proctor grabbed the next goal in the 63rd minute to make it 5-0, followed by his 2nd of the game from the spot in the 74th minute. The final goal of the game came in the 84th minute from Carlton Morris making it 7-0, a score line that was unfair on the Parkgate players for the effort they gave, especially keeper Butt who made several good saves throughout the game and was very impressive in what was a game of none stop action for the keeper.

Andy Dawson and his management staff will be looking for his team to take the lessons they learnt from the game against Rotherham in to their next pre-season game against Ecclesfield Red Rose at Roundwood on Tuesday 9th of July, which kicks off at 7:45pm.