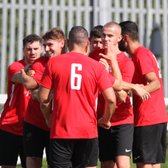 In what was a warm Saturday afternoon that saw water breaks used due to the heat, Parkgate put 2 past Retford to end their unbeaten start.

The cagey start to the game saw little chances for either team, the hosts hit the bar from a corner in the 13th minute but Parkgate’s defence did well to prevent many chances for their opposition. The opening goal game in the 35th minute when a corner came in from Harrison and McGowan met the delivery with a header to the far right corner.

The heat continued to cause a problem for both teams during the second half as another water break was needed in the half. The hosts created more chances in the second half as Ingham saved well from a free kick chance and had their penalty shouts turned away.

In the 65th minute the hosts scored from a similar situation as the opening goal, the ball came in from the corner and it was headed to level the scores.

As both teams pushed to get a winner, Yates’ cross made its way through the defence for Bagley to bundle the ball past the oncoming goalie and make it 2-1 to Parkgate.