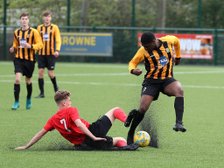 The County Senior League have confirmed our reserves will take part in The Brian Bradley Charity Cup.

The Brian Bradley Charity Cup will see many of the Division One and Two clubs battle it out – including Parkgate Reserves.

Clubs have been drawn into groups of four and then the competition will quarter-finals, semi-finals and final to decide the winner.

Parkgate Reserves have been drawn in Pool A alongside league rivals Silkstone United, Stocksbridge Park Steels Development & Division One side AFC Dronfield.

The County Senior League are still to officially confirm the dates of the games but the cup is set to begin at the start of April, with the final at the end of May.

The league have so far been unable to confirm the government and FA’s position on spectators at matches. Step 7 clubs previously followed different rules to Non League teams.