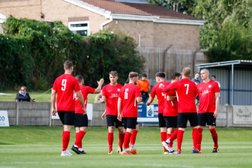 Any FA Vase hopes cut short in the first qualifying round after a 3-2 defeat at home to Chadderton.

The game started with a bang with two goals in the first 10 minutes. It was the visitors who took the lead in the 6th minute as a great piece of individual skill and control led to a great volley past Ingham. Two minutes later Harrison took the ball round his man on the edge of the box and shot low in to the corner to level the game up at 1-1.

The first half saw many chances for both teams. In the 12th minute Fusco shot over from long range, followed by two good saves by the Chadderton ‘keeper to keep the scores level.

Shortly in to the second half the visitors had a goal ruled out after a push in the back of one of the Parkgate defenders. The third goal of the game came in the 54th minute when after a mix up between ‘keeper and defender led to a goal for Chadderton to make it 1-2.

It took till the 74th minute for another goal. A well worked quick free kick was passed to the feet of Fusco who slotted the ball in to make it 2-2. After a 20 minute wait for the fourth goal of the game, it took only a minute for us to see the fifth. Chadderton took the kick off and before everyone had time to settle had scored again and were back in from 2-3.