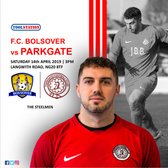 Andy Dawson’s Parkgate travel to FC Bolsover on Saturday, with both teams needing a victory to finish within their own targeted league positions.

Both Teams
An impressive run of four wins and a draw starting in February continued into the month of March but with two defeats in April, injury hit Parkgate go into the game in poor form with loses at home to Selby Town and Winterton Rangers. However, with Selby Town losing at Rossington Main in mid-week, Parkgate climbed back into eighth place without even playing.

FC Bolsover’s season has been slightly different, and while they aren’t mathematically relegated, it would take a good run-in of results for Division One's bottom side to avoid the drop, with them playing top ten opponents in their final three games.

Recent Form
Bolsover currently sit in 20th position in the NCEL Division One table, six points from safety. In their last five games, they have won two, and lost three. In those five games, they have scored in each of those games, conceding eleven goals. Their last game was a 2-0 home victory against another relegation threaten Ollerton Town last weekend. Goals from Jack Warwick sealed all three points for Bolsover.

Previous Meeting
A comfortable victory at Roundwood back in mid-December saw the Steelmen remain 13th. A first-half wonder free-kick from Simon Harrison, a Reece Hands strike, and second-half goals from Zak Khalifa and Bruno Holden capped off a 4-1 win.

One To Watch - Jack Warwick
FC Bolsover's front-man is their top-scorer this season and is in some decent form, scoring three goals in the previous two games. He was also the man which scored in the return fixture at Roundwood, nodding past Chris Butt in the Parkgate goal. Warwick has scored 14 league goals in 24 starts (1 substitute appearance), which is a good return for someone playing in a side which has won many games this season. He'll certainly be a danger on Saturday.