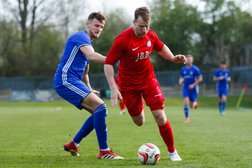 Parkgate slip to their second home defeat in a week, after a late own goal sees Winterton Rangers claim all three points.

A 90th minute own goal from Haydn Ward left the Steelmen with no time to find an equaliser at the end of a scrappy, yet entertaining game.

Parkgate came into the game with a number of notable absentees, and on the back of this, first team manager Andy Dawson was forced into naming himself in the starting-XI, with multiple youth team prospects also making the squad.

The Steelmen came flying out of the traps in the opening stages, and after just two minutes, Simon Harrison came close to giving his side an early lead. When space opened up in a favourable position to shoot from outside the box, the midfielder duly fired an effort towards goal, only to see it edge just wide of the target.

Parkgate continued to push for the opener, and just minutes later, Alex Rippon was the next in line to try and open the scoring. After chasing down a long ball over the top, the forward bravely battled with the visitors’ goalkeeper in the air, coming out on top, and creating an opportunity to shoot on goal. Rippon appeared certain to score, however, some valiant defending from the visitors saw his effort blocked on the line and eventually cleared.

Despite the Steelmen’s dominance over the early stages of the game, it was actually the visitors who had the ball in the back of the net first. Fortunately for Parkgate, however, the Winterton celebrations were abruptly cut short as the linesman raised his flag for offside.

The two sides continued to exchange chances as the half went on, and after Alex Rippon was excellently denied a goal by the hands of the Winterton ‘keeper, the away side came close to a goal of their own, when a powerful header was thumped just wide of the post.

As the first-half drew to a close, Chris Butt once again proved himself to be invaluable to the Steelmen’s cause. This time around, the Parkgate number one pulled off a superb save from close range to deny Winterton a goal, and ensure that his side went in level at the interval.

The visitors were quickest to the races at the start of the second-half, and, after just a matter of moments, there were strong appeals for a Winterton penalty. Failing to award either a penalty or a yellow card for a dive though, the referee waved play on, much to the dismay of the visitors’ bench.

This didn’t deter Rangers, however, and they continued to push for an opening goal as the game wore on. Some great build-up play down the left allowed for a cross into the box, but despite the best efforts of a Winterton forward, the ball sailed wide at the far post.

The Steelmen weren’t out of the contest just yet though, and some great work down the right from Brandon Bagley allowed the Parkgate forward to cut inside and take a shot on goal. The man between the sticks for Winterton was more than a match for this effort, however, and the score remained 0-0 until the 90th minute of the game, when the away side finally broke the deadlock.

After possession was stolen from Silas Valladolid-Collins in midfield, a swirling ball was whipped into the box from the right, forcing Parkgate defender Haydn Ward into taking action. Unfortunately, in doing so, the centre-back inadvertently turned the ball into his own net, sending the away side into hysterics and all but confirming the three points would be heading to North Lincolnshire.

The late goal left the Steelmen with virtually no time to find an equaliser, and despite their best efforts, the game finished in Winterton’s favour.