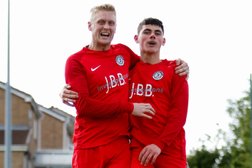 A final day victory over East Yorkshire Carnegie secured an eighth-place finish and a spot in next season’s FA Cup qualification rounds.

Ahead of the game, Parkgate boss Andy Dawson named the same starting-XI from Wednesday night’s 1-1 draw with Hallam FC.

Unlike Wednesday night’s game, however, the match started slowly with chances proving to be few and far between for both sides alike.

In the 27th minute, the Steelmen were rather controversially awarded an indirect free-kick in the box after a Carnegie defender was deemed to have played a pass back to his own ‘keeper. From the subsequent set piece, Lewis Whitaker fired a powerful strike towards goal, however, a combination of defender, goalkeeper, and eventually the post, kept the ball from crossing the line.

Parkgate continued to push forwards, and just moments later another chance presented itself. This time around, some brilliant play from Silas Valladolid-Collins down the left-hand side earnt the Steelmen a corner, however, Lewis Whitaker could only head wide.

The visitors weren’t entirely out of the game though, and as the first-half drew to a close the Parkgate defence was called into action. After Chris Butt was caught out of position on the edge of the six-yard box, Matt Crookes was forced to make a brilliant block on the line to keep the scores level.

The Steelmen came out strongly at the start of the second-half, and immediately created a multitude of chances to take the lead. First, Liam Morris saw an opportunity go begging as he headed wide from a Lewis Whitaker cross, and then Silas Valladolid-Collins fired a powerful strike straight into the hands of the Carnegie ‘keeper.

The visitors weren’t out of the game just yet though, and after Parkgate had flooded men forwards in search of the opening goal, the away side quickly countered forcing Chris Butt into making an excellent save to ensure the scores stayed level.

Parkgate’s pressure did eventually pay off though, and in the 70th minute Brandon Bagley opened the scoring. After a cross into the box was deflected into the path of the forward, he could make no mistake as the ball cannoned off of his chest and into the back of the net, provoking jubilant scenes amongst the Parkgate players and staff.

The Steelmen could well have had another just minutes later, and after the ball was swung in from a corner on the left, Matt Crookes saw his header fly agonisingly just over the crossbar.

The final stages of the game then began to mirror those of the opening 15 minutes, with chances coming at a premium for both sides. A few minor scares aside, however, and Parkgate saw through the game to finish the season on a high and secure a spot in next season’s FA Cup.