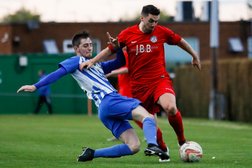 A sterling second-half showing from the Steelmen secured an invaluable point in the battle for eighth place and FA Cup qualification.

Ahead of the game, Parkgate boss Andy Dawson made five changes to the side that had been well beaten at league leaders Campion AFC the previous weekend.

Despite a positive start to the game, the Steelmen soon found themselves on the backfoot as the promotion chasing visitors sought to assert their dominance in the early stages of the match.

Hallam’s pressure soon paid off, and in the 23rd minute, some neat build-up play down the right presented the visitors with the opportunity to cross the ball into the box. Such an invitation was duly taken, and from the resulting ball, a glancing header from Kieran Watson proved just enough to beat Chris Butt in the Parkgate goal and hand the visitors the lead.

This proved to be the rallying call the Steelmen required, and they responded immediately to the goal by applying pressure to the Hallam defence. First, after a quick counter attack down the left and subsequent switch ball from Ashley Simpson, Brandon Bagley cut inside and fired a stinging effort just wide of the Hallam goal.

Following this, Parkgate continued to press forward, and just moments later a cross into the box was excellently headed back across goal by Bruno Holden, only for Liam Morris to place his following effort just over the bar.

The signs were positive for the Steelmen though, and in the 41st minute, they finally got their reward. After possession was quickly turned over in the midfield, an intelligent ball from Bruno Holden saw Liam Morris through on goal, and the forward made no mistake, neatly poking the ball beyond the Hallam goalkeeper to ensure Parkgate went in level at the break.

The second-half began in a similar fashion to which the first-half had ended, with Parkgate notably on top. Just minutes into the half, and numerous chances had already presented themselves to Silas Valladolid-Collins and Brandon Bagley, however, neither could find the back of the net.

Not long after the hour mark, and the Steelmen could twice count themselves unfortunate not to have taken the lead. First, after a free-kick was flicked on in the box by Liam Morris, the ball fell invitingly to Parkgate top scorer Bruno Holden in acres of space, however, the forward, could only fire wide from close range.

Just moments later, after a free-kick was this time awarded on the opposite side, Holden rose highest to meet the ball in the middle of the box, only to see his effort fly agonisingly wide of the target.

From this point onwards, it became clear to see that the game had swung back in the favour of the promotion chasers, with a number of chances following suit. Not for the first time this season, fan favourite Chris Butt was soon called into action, making a brilliant save from point blank range to deny the visitors.

The barrage showed no signs of letting up, and just moments later another Parkgate player was called into action. After a corner was whipped in from the right, and with it seemingly all but certain that Hallam would regain the lead from short range, Matt Crookes produced an excellent block on the line to keep the Steelmen level.

As the game moved into the final 10 minutes, the visitors, still sensing a goal was within their reach, continued their all-out attack, forcing the Steelmen to put their bodies in order to deny Hallam a second goal.

Ultimately, Parkgate did just that and bravely battled out the final few minutes to secure an invaluable point and move back into the all-important eighth spot.