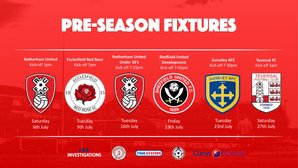 By Parkgate FC Media
21 May 2019
Share via
FacebookTwitter
https://www.pitchero.com/clubs

Our preparations for the upcoming 2019/20 campaign have been confirmed.

Parkgate are set to host six friendlies across the month of July at Roundwood, including exciting encounters against Football League outfit' Rotherham United and National League North side' Guiseley.

As per last season, the Steelmen first team will welcome newly relegated League One side Rotherham United at the beginning of July. The annual fixture between the two sides will take place at the home of Parkgate Football Club and next door to the Miller's training complex at Roundwood. The game is pencilled in to kick-off at 1:00pm on Saturday 6th July, with a bumper crowd expected.

The Steelmen will host five more home fixtures at Roundwood prior to the league season starting on the 3rd of August.

Parkgate will then entertain National League North Guiseley on Tuesday 23rd July (KO 7:30pm), before playing Teversal FC a week prior to the season on Saturday 27th July (KO 1:00pm).