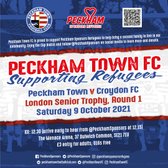 The Menace will welcome Peckham Sponsors Refugees at our home London FA Trophy match on 9 October vs Croydon FC, which will kick off at 12.30pm.

Peckham Sponsors Refugees (PSR) is a local voluntary organisation that has recently reformed to sponsor a second refugee family to live in Peckham. We will be hosting them during our Cup match on 9 October, which also coincides with FARE’s Football People Week. PSR will have a stand at the match, where you can find more about their plans, and also donate to the campaign to support a second family settle in Peckham.

Simon Canter, Chair of PSR, said: “An estimated 2.6 million people live in refugee camps, often in appalling conditions. It’s easy to feel helpless about the refugee crisis but the Community Sponsorship scheme is an amazing opportunity to really make a difference by providing a home and new life to one of these families. We want to spread the word that our incredible, diverse and generous Peckham community welcomes refugees. That’s why we’re so grateful to Peckham Town FC for today’s event with the mighty Menace, which is such a brilliant gesture.

Bryan Hall, Chair of Peckham Town FC, said “When I heard about the aims of the PSR, it was a no brainer for me. We are an inclusive football club, and an inclusive community. It’s only natural that we want to help a family improve their lives in Peckham, and hopefully become part of the Menace family too!”

In March 2019, PSR welcomed its first family – from Syria - to Peckham under the government's Community Sponsorship Scheme. Hassan, his wife, five children and daughter-in-law were forced to leave Syria during the civil war after airstrikes damaged their home. They fled to Jordan where they applied to the United Nations Refugee Agency to be resettled in another country.

With support from the local community, PSR found a home for the family and helped them sign up to health care services, enrol the children into local schools and improve their English language skills. Hassan said: “We were so happy when we came to Britain. In Europe, we have rights and a future. We encourage volunteers to bring another family here in the same way they brought us.”

We hope that the Peckham community will turn out in numbers to support the team in the LFA Trophy first round match versus Croydon FC, and also show solidarity to PSR’s Refugees fundraising efforts. The match will kick off at 12.30, and we ask you to arrive a little early by 12.15 to hear from PSR and learn more about their campaign.

We hope that the early kick off will allow supporters of other teams in the local area to visit our match, and also attend their 3pm kick offs, such as Dulwich Hamlet, Fisher and Charlton Athletic fans! It’s also the international break, so we hope that Premier League and Championship football fans may venture to the Menace too. The attendance record at the Menace is 275, and it would be great to beat that! So please encourage your friends and family to come to the match.

Entrance will be the usual £3 for adults and free for U16s. Programmes are £1 and a raffle ticket is also just £1. A fiver will therefore get you entry, a programme and a raffle ticket, and you can’t say fairer than that! This is a Cup match, so season tickets are unfortunately not valid.