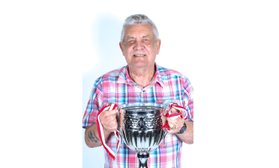 The Menace family mourns the passing of Don Walters

With great sorrow we are sad to say that our Life Vice President, Don Walters, passed away at the weekend.

It was with a heavy heart that we learned of the passing of Don Walters last Sunday. Don was a big personality within the Menace family, and was well liked by all that met him. He had become a father figure for the club over recent years, and was bestowed with the honour of Life Vice-President several years back. He was known to some of the Menace regulars as “The Don” in recognition of his kind manner to all within and outside of our great club.

Bryan Hall, our Chairman and Founder, initially met Don when he was playing for Lee Bridge in the Metropolitan League and Don was the Manager in the early 1990s. They crossed paths again a few years later when he was managing Concepts FC, and where long-term former Menace Manager Alan Jacobs was also coaching at.

Bryan brought both Don and Alan over to Peckham Town in 2000 and both were a big part of the club ever since. His love for the club was very real and he would never fail to tell anyone he met at matches how special the club is. In recent seasons, when ill health has prevented Don from attending as many matches, he would still always call up Bryan after the matches and spend many an hour chatting about the performance.

We will honour Don with a minute’s silence before the match versus Red Velvet on Saturday.