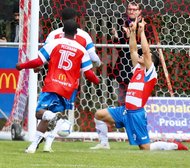 Unlocking football at the Menace

Football is back at Peckham Town!

Football can restart at the Menace from Monday 29 March, when the first stage of the Government’s easing of lockdown will start. The FA have also confirmed that the grassroots season has been extended till the end of June to allow leagues the time to complete fixtures. We are working to ensure that the club’s facilities are safe and ready to open from this date.

It is with regret that our men’s first team will not be restarting their league season. At a Special General Meeting on 17 March, a minority of Kent County League clubs voted to null and void the season. A majority of 43 to 39 voted in favour of restarting the season, but a prior motion set the bar at 75% being required to enable a restart. We will be writing to season ticket holders shortly on what this means for you. The 2021/22 league season will start on Saturday 7th or 14 August (TBC).

In better news, the London FA Cups and Competitions committee have voted to continue with adult Cup competitions. This means we will get to defend the London Senior Trophy that was won in a delayed final on a memorable evening last August. The first team will play Croydon FC at home at the Menace Arena in the second round at a date to be confirmed. If successful, then the quarter-final and semi-final will be away from home and the final at a neutral venue.

We are also pleased that the respective leagues of our Reserves and ‘A’ Team will restart on 3 April and all home games will be played at Pynners Close Playing Fields. Our Reserve team will be playing “double headers” on three Saturdays in April to catch up. This consists of two sixty-minute matches against the same opposition, and six points will be available for the outstanding home and away match. This means the team are likely to play some ‘home’ matches away and vice versa. The fixtures for both teams can be found under the relevant team section on our website. All our youth teams will also restart their league seasons from Sunday 4 or 11 April, and full details of these fixtures can be found here.

All fixtures at Pynners Close Playing Fields will be FREE entry. The FA have confirmed that supporters will be permitted to return from Monday 12 April. Under current plans, then our managing COVID guidance will remain largely in place until 21 June, i.e. supporters permitted in groups of six, while maintaining distance from other social bubbles. There are no refreshment facilities at Pynners, so please BYO.