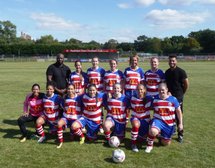 No more wandering as the season gets underway

It was a sunny afternoon at the Menace Arena today, as Town women's team got their season off to a flying start. The Menace had several chances to open the scoring in the first half hour, but Peckham found the visiting 'keeper in fine form as she managed to keep the attempts out. The deadlock was finally broken after 30 minute following good work down the left, the ball was pulled back for Gloria Diaz to hit the ball across the 'keeper and into the far corner.

The game was put to bed on the hour mark following three goals in the space of three minutes. Sam was bundled over in the box, and the resulting spot kick buried with aplomb by Lucy Rix. Sam Kilroy-Downs then grabbed a goal of her own, as her shot from the edge of the box found the opposite bottom corner. The Menace went 4-0 up following a great save from the Wanderers' goalkeeper, but unfortunately for her the rebound found Sacha Hove waiting to head the ball home.