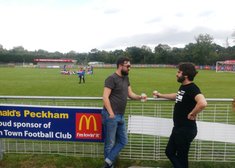 Town failed to score and fell to fourth defeat out of five league games.

The Menace made a trio of changes from the previous game, with George Legg returning between the sticks and Herve Mbongue recalled to the starting eleven. Habib Bashir was rewarded for his performances in the Academy team and started in the centre of defence, despite being only sixteen years of age.

The Menace performed well in the first half and had opportunities to take the lead, but Valentine Tyrell and Marcus Black up top were not able to take them. Instead it was the visitors’ prolific striker that bagged a brace for the visitors. Two searching balls forward found Louie Clarke, and he drilled a left and right foot finish past George Legg in goal.

Bryan Hall, Chair and Founded, said “With a number of regulars still unavailable to Mary Phillip [Town’s Manager), and the high number of games at the start of the KCFL season, then this South London derby came at the wrong time for us.”

Peckham Town are at home against Club Langley in the Cup on Saturday 7 September. You can keep updated on all the goings on at Peckham Town by following @PeckhamTownFC on Twitter and Instagram.