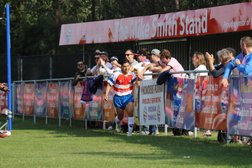 Peckham picked up their first league win of the season after a dominant display against Ide Hill. Sam Boyle with the report.

Having drawn their opening game, the Menace were looking to secure their first home win of the season at the second attempt. From the start, Peckham were finding space down the wings. Peckham continued to build pressure and were justly rewarded when Tidian Barry latched onto a pinpoint pass and calmly slotted home through the keeper’s legs early on.

The Menace were not complacent after taking the lead and continued to take the game to the visitors, with Montella Joshua finding plenty of space down the right-hand side of the pitch. Captain Nicky Meta went close with an ingenious chip from 20 yards floating just over the bar.
Despite the early pressure, Peckham nearly threw away their lead . A momentary lapse in defence nearly let their opponents back into the game, with only an exceptional save from George Legg and heroic last ditch defending from Elliot Hardisty, saving the hosts blushes.

Moments later and Peckham nearly doubled their lead with Bryan Villalba getting on the end of a knock down from a cross and putting his chance just over the bar. Ide Hill drew level shortly after, with an equaliser arguably against the run of play. They put together a well worked goal within the Peckham penalty area with some lovely one touch passes and a cool finish which George Legg could do nothing about.

The equaliser only galvanised the Menace with Peckham dominating before halftime, but Ide Hill demonstrated some resolute defending. The Menace retook the lead when Nicky Meta put through Tidian Barry after a delightful turn and pass, who was denied only by an excellent save from Ide Hill’s keeper Mike Mckay. However, the visitors failed to clear their lines allowing Bigan Dias to force a save, but the ball fell at the feet of Tidian Barry, who made no mistake from close range. Peckham nearly put the game to bed after a quick counterattack with Bryan Villabella dribbling round the keeper and cutting back to Montella Joshua, who agonisingly put the ball over the bar from close range.

With all to play in the second half, both teams pressed hard for openings that could decide the game. Having dominated before halftime, Peckham showed no signs of dropping their intensity with the home side forcing corner after corner. Mike McKay was forced to make an outstanding save to keep Ide Hill in the game before Peckham once again caught the visitors on a break after Bigna Dias capitalised on a mistake in the middle of the park. Dias and Bryan Villabla combined well on the overlap and Villabla swung in a dangerous delivery into the box which was met by a powerful header, which was put just wide of the goal.

Peckham’s dominance was rewarded with a third goal from a set play, when Bryan Villalba dispatched the rebound from Mckay’s initial save for a debut goal to remember. Ide Hill nearly responded straight away with good defending required to prevent them from having a clear shot at goal.

A dangerous free kick from Barry nearly extended their lead with McKay making a smart save. Yousuf Bouimane also went close after a slick turn and shot which flew over the crossbar. Despite a frantic few final minute, only one result looked likely and no one could argue with the score line at the final whistle.

Mary Phillip, Peckham Town Manager commented after the game saying "It was a comforting home win after last week’s draw, it showed the passion that we wanted to go and win the next game."

Peckham Town will be in action at home again on Saturday 26th September , when Faversham Strike Force visit the Menace Arena. If you enjoyed your afternoon with us, then why not buy a season ticket for just £30, which can be ordered here.