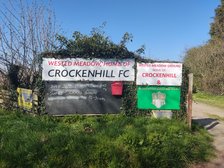 NO BARRAGE OF GOALS FOR THE MENACE AT CROCKENHILL

Peckham continued their campaign after a weekend off on the road again at Crockenhill's historical Wested Meadow ground. Dave Webster reports...

Having dropped two valuable points in their previous outing at New Romney, surely in this game they would notch up their goal difference. Crockenhill however, despite officially been relegated last week, had other ideas. The Menace welcomed back two key players absent from the last outing. Adam Carrick returned in central defence alongside the versatile Elton Romaku and captain Nicky Meta slotted in at right back. Defensive stalwart Charlie Egleton, pushed up to partner Tidi Barry in midfield in place of the sick Joe Thomas, and Hamid Bangura took his place alongside the goal machine Joshua Montella up front. George Legg lined up in goal, Kevin Dance on the right wing and Kieran Dowding on the left wing. Norman Hong, David Gabor and Marcus Black made up the bench.

From the get go Peckham meant business and Joshua Montella shot high over in the first minute. Hamid Bangura had the goal at his mercy four minutes later following a cross from Joshua Montella, but it sailed over. Maybe the hard pitch had a lot to answer for as the ball did seem to bobble first, signs that this would be a difficult game for both sides.

Crockenhill, with several new players were showing signs that they wouldn’t be a pushover, as they played route one attacking football from the start and had chances on the break. On 15 minutes the Menace had shouts for a penalty waved away by the official. Joshua Montella broke in to the penalty area on the left only to be sandwiched between two defenders. Down he went and the shouts of a penalty from the Menace bench were to no avail. Peckham persevered and within the space of four minutes, Hamid Bagura rattled the Crockenhill crossbar twice. The first after Kevin Dance crossed from the right on 18 minutes, the second after he broke through the hosts defence and shot from 15 yards out. Maybe on the second occasion, the keeper got his finger tips to it though!

Peckham had their second penalty appeal on 24 minutes. Hamid Bangura passed to Tidi Barry from just inside the area, the midfielder jinxed his way in to the area only to be clearly tripped. However, the theatrical fall following the trip probably didn't help the Menace's clear claim.
A goal was surely coming, but it could have been from either side, as Crockenhill continued to threaten with their long balls from the back and the unpredictable bounce made defending difficult. George Legg was perhaps lucky to stay on the pitch, as he appeared to handle outside the box before diving on the loose ball inside the box. Fortunately, the assistant referee was behind play and failed to see the offence.

As the first half passed the half hour mark, it would be Peckham that looked most likely to score. Joshua Montella came close again on 33 minutes. Opting to lob the out rushing keeper, he just put too much on his shot and lifted it over the bar. However, knowing that Joshua Montella likes to score as half time approaches, it was no surprise when he netted on 42 minutes.

Again it was Kevin Dance that provided the cross, but it only found a retreating defender. Unable to adjust his position to clear properly, the ball bounced kindly for the Menace goal machine. Joshua Montella hit it on the half volley with his favoured left and powered home low into the right hand corner of the goal, the keeper rooted to the spot. The Menace faithful erupted into cheers of delight, and probably relief too. They wouldn’t have to wait too much longer to repeat their celebrations either.

On 44 minutes Joshua Montella struck again. He picked up the ball on the left hand side and as he entered the 18 yard box he struck the ball sweetly beating the advancing keeper at his near post. On balance of play, it was no more than Peckham deserved, and yet again, Mary’s half time team talk would be just that little bit easier. Incredibly, this was the sixth goal that Montella has scored between the 42nd minute and half time in the last four outings.

Peckham kept the same starting line up for the second half, and would be hoping to add to their tally. Crockenhill would however have other ideas, as after their first half display, they must have felt aggrieved to have gone in 2 goals down. And the second half continued much like the first. Both teams continued to play attacking football, Kieran Dowding shot wide on 50 minutes after Joshua Montella played him in on the left.

A minute later the Menace had a free kick just outside the right hand corner of the Crockenhill box. This was the first free kick, other than offsides, that the Menace had been awarded during the match! A chance for Elton Romaku to whip a ball in with his left boot, he looped the ball over everyone and found Adam Carrick at the far post, but he could only knock it across the goal and out for a goal kick.

Mary decided on her first of three changes in a 15 minute window in the 57th minute, Norman Hong coming on for Tidi Barry. Making his first start since recovering from his injury, this was a wise choice. Three minutes later and David Gabor came on for Hamid Bangura who did everything right bar scoring.

Crockenhill were provided an opportunity to score on the break when a clearance hit the referee and fell kindly with the Peckham midfield wrongfooted. Protocol has been for the game to be restarted with an uncontested drop ball for several seasons now, but this change in the laws has clearly alluded today's match official, as he bizarrely allowed play to continue. It was not the first decision that had raised eyebrows of supporters this afternoon.

Mary made her last unenforced change on 72 minutes as Marcus Black replaced Joshua Montella. He may have felt frustrated at not getting a hat-trick but he had definitely earned an early rest. However his time out lasted just over ten minutes when he was called back in to action in the 84th minute. Kieran Dowding picked up a slight knock minutes earlier after a couple of rash challenges on the Peckham winger, which had gone unpunished, including one that was awarded the other way much to the amusement of the home 'stopper. Unable to run it off, Mary opted to replace him.

As the game entered 6 minutes of added time, Joshua Montella had his hat-trick in sight. He nicked the ball off of a Crockenhill defender before he had the chance to clear, and with the goal at his mercy he could only hit it high over the crossbar. Even as the full time whistle approached Nicky Meta had a great chance to get on the score sheet. Finding himself in acres of space he shot unchallenged from 20 yards out, but again it went high over the bar.

The officials called time 3 minutes later and the Menace faithfull erupted into applause, as much for their own side and their hosts. This was a game that many thought could have been a goalfest, but the hosts did themselves proud. Hopefully Crockenhill’s absence from the Kent Premier is no more than one season, and if today’s performance is anything to go by, I’m sure that is all it will be.