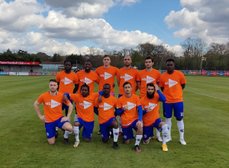 Dave Webster reports from the Menace Arena and a crowd of 183.

Today’s game was always going to be difficult against a resurgent Ten Em Bee that have come out of nowhere into the top three in the league. Unbeaten in their last 15 games in the league, their emergence as at least a top 3 finisher is totally justified.

Mary Phillip had hoped to start the same XI that earned a draw away at Red Velvet last week in such a dramatic fashion. However, the Saturday traffic meant that Joshua Montella would not make the kick off. Add to that the absence of Kevin Dance it meant Emmanuel Cobbina would start on the right wing and Hamid Bangura started up front alongside David Gabor. Joshua Montella would have to settle for a place on the bench with Joe Thomas and Marcus Black.

However, today was not just about football. It was also about raising awareness and money for the MS Society too. Having recently been announced as an Ambassador for the MS Society in recognition of her inspirational story with our charitable partner, many will not know that Mary Phillip also has MS, today was a fitting tribute to her and the charity.

From the off Ten Em Bee were up for this and this was evident as they had a corner within the first minute of the game. They meant business, and thankfully, on 4 minutes George Legg had an easy save from the visitors no 4. Peckham were slowly but surely finding their feet, when on 8 minutes Kieran Dowding was taken out as he attacked on the left wing. The resulting free kick from the captain Micky Meta however, was punched clear by the Ten Em Bee stopper.

It was these two players again in the action three minutes later, as Kieran Dowding crossed from the left. Not one of his finest crosses, it went straight to a defender but his clearance only found the Menace captain just outside the right hander corner of their 18 yard box. Unfortunately the skipper's shot went high over the bar. Peckham continued to dominate and on 13 minutes Tidi Barry cut in from the left only to shoot straight at the keeper.

Ten Em Bee pushed forward and were rewarded a penalty on 15 minutes. As Kieran Dowding tracked back to help defend, he miss timed his challenge and neither the referee or his assistant hesitated in giving the spot kick. There we’re certainly no protests from the Peckham bench or players, so it would all be down to George Legg. The spot kick itself was a real daisy cutter, low to the keeper's right. George Legg managed to get his hand to the ball but it just wasn’t enough to keep it out. Peckham perhaps could feel a little unlucky to be one down under the circumstances.

Peckham however, play with that ‘never give up attitude’ and they should have levelled six minutes later. Certainly not one for the scrap book, Tidain Barry shot wide when it was probably easier to have scored. Maybe the same could have been said again within a minute. David Gabor was through on goal but hit it straight at the keeper. As the half hour mark approached the visitors decided on an early change, their left winger replaced on 29 minutes. Within 4 minutes Mary opted for a change too. Off came Emmanuel Cobbina who was clearly struggling in his unfamiliar right wing roll. On came the versatile Joe Thomas taking over the right back position meaning the skipper Nicky Meta pushed up into a more familiar right wing roll.

The changed obviously worked and Peckham began to push for the equaliser. This nearly came in the 41st minute when David Gabor forced the visitors keeper to make a great save. He let fly with his left foot just inside the 18 yard box, the keeper stretching to his right to parry the ball out for a corner. Even as the game entered added time in the first half Peckham kept pushing, and Nicky Meta can only feel his cross could’ve been better as it only found the keeper.

So for the second week running Mary would have to give her half time team talk a goal down. Hopefully her inspiring words would work quicker than in last week's very late comeback, and with no further changes Peckham got the 2nd half underway. It’s not always the opposing team that your up against, as the Menace were denied a blatant foul on 52 minutes. David Gabor had the ball over by the near corner flag, and as he turned his marker he did appear to slip slightly. Having quickly regained his feet, he beat the defender to the ball and was clearly dragged to the ground. The referee and his assistant had a clear view but weren’t impressed and play continued.

Three minutes later saw Charlie Egleton enter the referees book for protesting too much. Right or wrong, his protests were slightly warranted, as a Ten em bee defender went down injured off the pitch over on the far by-line. Not injured enough for him to roll several times and back on to the field of play to get the game stopped!! Nonetheless into the book he went.

Within two minutes Mary decided it was time for another change, and David Gabor made way for Joshua Montella on 57 minutes. Three minutes later it was Kieran Dowding's turn to bring out the best from the Ten Em Bee keeper. He unleashed a thunderbolt from 18 yards and the keeper saved well. From the resulting corner Kieran Dowding had another effort but he hit it high and wide.

On 63 minutes it was time for last weeks hero to come on, as Marcus Black replaced Hamid Bangura. He was almost the hero again after 75 minutes, bearing down on goal and about to pull the trigger the chasing defender just got his foot in in time. To everyone’s amazement a goal kick was given when surely it was a corner? Within a minute Joshua Montella was in on the visitors goal. Unfortunately as he went to nick it around the keeper, he got a hand to it and gathered the ball at his second attempt. Signs that Peckham weren’t out of this game just yet.

It was on 80 minutes when the crowd thought the equaliser was incoming. Nicky Meta sent in a looping shot that look destined to find the net. The visitors keeper however had other ideas and as the ball looked to beat him, his acrobatic last second leap saw him tip it over the bar. This was turning out to be one of those games where nothing was falling for the Menace. On 85 minutes, Mary went for broke, bringing David Gabor back on for Nicky Meta, all-out attack for the last 5 minutes plus added time. The chances were coming but were just not clinical enough.

A blatant handball on 87 minutes gave Peckham a great opportunity to equalise. The guilty player also seeing yellow for kicking the ball away in frustration. Tidi Barry lined it up from about 25 yards out, but he put too much on it and it sailed over the bar. As full time approached Elton Romaku sent another free kick from 40 yards out high into the penalty area. It was headed clear but dropped kindly for Joshua Montella but his resulting volley sent the ball high out of the ground!

Into added time the game went, but there was no come back this week. Even after an added minute due to a Ten Em Bee player receiving treatment, it was just not to be for Peckham. Despite matching a strong opponent all over the park, it was the finishing that let the Menace down in the end.