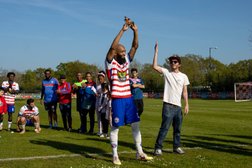 7-UP FOR THE MENACE AS OTFORD CRUMBLE

So you may have heard there was a massive game of football on Saturday, and there was also a game at Wembley too! What more could you need though, two extra days off, glorious weather and the highest home crowd of the season. Dave Webster reports.

Mary made two changes to the match day squad from last week's defeat at home to Ten Em Bee. Fidele Kassindi started at right back and Joshua Montella was fully available this week, to reclaim his starting position up front. Peckham meant business from the off and almost took the lead in the 3rd minute. The Menace were awarded a free kick from about 40 yards out which Elton Romaku took. His effort beat everyone, including the retreating keeper. Luckily for said keeper the crossbar came to his rescue and although the ball fell kindly for Joshua Montella, he never really got a hold of the ball and the Otford stopper gathered it easily. In scrambling for the ball, the Menace striker suffered a bloody nose and had to leave the field for continued treatment for about five minutes.

After a shaky start the visitors began to grow into the game, but this didn’t deter Peckham. Captain Nicky Meta had a great chance to open the scoring in the 16th minute, but was tackled as he was about to pull the trigger. As the Menace skipper went down there were appeals for a penalty but the official waved play on. Five minutes later, Hamid Bangura got his first shot of the game away but could only hit it wide of the far post.

On 23 minutes Peckham broke and the skipper played a beautiful ball across the 6 yard box to find Joshua Montella. He hit it first time and the visitor’s keeper saved from point blank range and Otford defence cleared but only as far as the 18 yard line. However the visiting keeper had stayed down and initially looked unconscious and as Peckham shot at an empty net, the official blew to stop the game just before the ball hit the back of the net. Thankfully after some treatment from Peckham’s physio he was fine to continue three minutes later.

As the half hour mark approached there were appeals for another Peckham penalty as Fidele Kassindi found himself bearing down on goal. To be fair he went down somewhat all too easily which made the officials decision simple. The chances were coming thick and fast now for Peckham, but Hamid Bangura hit it wide again on 32 minutes. Was this going to be a repeat of last week when it was a case of missed chances? The answer to that question came within a minute as Fidele Kassindi again bore down on the Otford goal. He opted to cross and as he did he was fouled but the incoming Tidi Barry powered home from close range much to the delight of the Peckham supporters.

On 39 minutes the Otford keeper needed further treatment. This time after he appeared to turn his ankle as he tried to clear from a back pass. As the game continued he obviously looked in some discomfort and was not moving well at all. This proved to be an advantage as Peckham then doubled their lead in the 42nd minute. It was the captain Nicky Meta’s turn to get on the score sheet. Again Peckham powered through the Otford defence and the ball fell to the captain just outside the far corner of the 6 yard box. He controlled it well and powered home past the almost rooted keeper’s near post. Surely game over now?

Well, the answer to that question came in the 1st minute of added time. Peckham failed to clear their lines and the hosts pulled a goal back, George Legg having no chance of saving it as the ball crept in to his left. As the added time continued Peckham had a great chance to get their two goal lead back. A quick corner from Nicky Meta to Mustafa Hashemi saw him cross deep into the Otford six yard box. The ball found Adam Carrick unmarked at the back post but his header was well saved by the Otford stopper and cleared. The official soon brought the first half to a close, and Peckham went in deservedly ahead, albeit by only the one goal. Mary’s half time team talk would surely be a simple ‘more of the same in the second half please’?

In fact the second half was pretty much more of the same and a lot more. With no half time changes by Mary, Peckham went into attack mode. Within three minutes of the restart the Menace had the ball in the net again, only for the assistant to raise his flag for offside. Mary then made her first change of the game, Marcus Black replacing Hamid Bangura on 54 minutes. Peckham then won a corner shortly after which Joshua Montella would take and score Peckham’s third. Yes it hit a defender and went in, but it was on target, and he will no doubt claim it, and rightly so.

Peckham’s two goal advantage was now restored on 55 minutes. However the visitors wouldn’t crumble just yet and it needed a good double save from George Legg to deny them a second goal from a corner on 58 minutes. A minute later Mary made her second change, midfield maestro Tidi Barry being replaced by Joe Thomas.

From this point onwards the flood gates would open. Within a minute Joshua Montella had his second of the game, unleashing a shot from 20 yards out, beating the keeper at the near post to make it 4-1. He almost had his hat-trick five minutes later but hit the side netting. Emmanuel Cobbina then came on for Kieran Dowding in the 72nd minute shortly before Peckham added a fifth and sixth just 60 seconds apart.

Five minutes after the Menace substitution Adam Carrick scored from 20 yards out. The goal came from a free kick that was obviously one from the training ground. Nicky Meta looked as if he would curl it around the wall, instead he played a cheeky pass diagonally to the Menace defender who placed it in the bottom left hand corner of the goal.

Nicky Meta would then get his second of the game. Marcus Black shot well and the Otford keeper could only parry the ball out to the skipper who powered it in from 6 yards. Time for a fourth change before the restart and Tidian Barry returned to the midfield replacing Elton Romaku in central defence. After another commanding display in the middle, Charlie Egleton would make way in midfield and slot into the back four for the remainder of the game.

The final Menace goal came three minutes from the end of normal time. Finding himself in an unfamiliar forward position again, Fidele Kassindi latched on to a through ball and took it round the advancing keeper and walked the ball into the empty goal. A much deserved reward that capped off a fine display from the eventual King of the Match. The game entered added time, and credit to Otford they kept pushing forward, as they had done for most of the second half. However the referee called time and the Menace faithful erupted into joyous celebrations. This was a fitting finale at the Menace Arena in what can only be described as a fantastic season of football from this team.

After the game, the crowd stayed behind to watch the Supporters Player Of The Season award ceremony. Every one of the Peckham team could easily have claimed the award, but it would ultimately fall to the goal machine that is Joshua Montella. With 25 goals from 24 appearances, it was no surprise when he won!