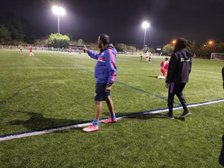 A KICK IN THE HALLS FOR PECKHAM

Peckham travelled to Dartford for their first away game under the floodlights at the Princes Park Stadium Community Pitch. After Saturday’s opening fixture defeat at home, Mary was hoping for an instant reaction from her players. A new formation was on show with three at the back, and Egleton holding in front. This meant it was bound to be an interesting game.

Right from the referees whistle the hosts won the ball and attacked the Peckham goal, thankfully shooting wide. A very early wake up call if ever there was one. Peckham’s first chance came in the 4th minute, but Ethan Frederick couldn’t get enough power on his header and the Halls' keeper saved comfortably.

There was very little respite as both teams were playing attacking football, really end to end stuff. Peckham countered in the 12th minute but skipper Nicky Meta blazed over, and on 15 minutes the ball was in the back of the Halls net after the hosts keeper fumbled the ball but the assistant had his flag raised for offside. Three minutes later and there was another let off for Halls keeper but in the scramble for the ball he eventually managed to gather.

There was a lot of controversy surrounding the opening goal of the game in the 19th minute. A through ball between the Peckham defenders found the Halls attacker who slotted past the advancing George Legg. Calls went out from the Menace players, bench and supporters for offside, which it did look, but neither the official or his assistant were interested. Soon after the restart Mary was forced in to an early change, Ethan Frederick went down in some pain with a back injury, and was replaced by Camilo Andres Nieva.

Sometimes such an early change can disrupt the rhythm of play, but this gave Peckham a boost as they began searching for an equaliser. Jacob Kemp cam close on 24 minutes, his effort from 25 yards hitting the crossbar. Five minutes later David Gabor broke through the hosts defence but shot straight at the advancing keeper.

Controversy followed when on 36 minutes Nicky Meta sent a cross in from the right. The ball eventually found Hamid Bangura with his back to goal. As he tried to compose himself he was bundled to the floor. Surely a penalty?! However the referee waved it away to the dismay of the player, staff and supporters alike. This gave the hosts a boost and the countered, again beating a tight offside call, and their striking calmly chipped the ball over George Legg as he came out to narrow the angle.

Peckham by now were obviously feeling hard done by, and rightly so, but continued to at least try and get a goal back before the break. The hosts were becoming more and more physical and saw both centre backs enter the referees book for cynical fouls. Both resulting free kicks however, on 42 and 45 minutes were wasted, and the first half eventually cam to a close.

Whatever Mary said at half time to her team must have gave them a kick up the back side, as they came out attacking in the second half. But it was all in vain after chance after chance went begging for Peckham.

It was the hosts that got the next goal, again on the counter attack and against the run of play. The ball crossed in from the right found the head of an incoming Halls' winger who headed home past the helpless George Legg. Peckham’s heads had clearly dropped now, despite the backing from the Menace faithful.

It wasn’t until the 70th minute that the Menace finally got on the score sheet after being awarded a penalty. Despite it having to be retaken, Nicky Meta slotted the ball home from the spot to give his teammates a glimmer of hope. Both teams continued to play end to end football. Mark Matthews pulled up with cramp and had to be replaced by Tidi Barry in the 73rd minute, resulting in Joe Thomas slotting into defence.

The hosts, however managed to hold out to secure their first win of the season, Peckham falling to back to back defeats. Time again to regroup and recharge for the next game, at the Menace Arena on Saturday.