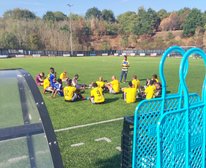 PECKHAM CAUGHT OUT ON THE ROAD

Visitors put in a good performance, but ultimately lose 2-0. Dom Smith reports from the Greatness Recreation Ground - the home of Sevenoaks Town FC.

We all have Bucket List away games. Anfield under the lights. The Südtribune on a crisp, cold winter’s day. The clubhouse at Met Police Crockenhill. But today, Chipstead, was a big one ticked off for me.

The reason? Not long after moving to London I remember going to a Palace game. Home to West Brom. I was with some Baggies mates and we got the train from town. Standing in the bit by the door and looking at the train map to work out how long we had before getting off, I remember seeing a station name and going “Nah, that’s never a real place, won’t believe it till I see it”.

Turns out: Bat & Ball is a thing and I can now say I’ve been there. Rather boringly, it’s not the birthplace of a racket sport, or an entire rhyming slang themed village, or the site of chiropterian juggling. It’s just named after a pub. So basically it's a roundabout with delusions of grandeur.

If that was an underwhelming start to the afternoon, the game that followed it had even less whelm.

Peckham Town came into the match bottom of the League, having played and lost three. With just one scored from open play, several more conceded from set pieces and defensive errors, and a general air of not having replaced a thirty goal centre forward threat up front, the visitors would surely be happy with an away point to get their season going. The opposition meanwhile had registered a first win of the season in their previous game, also at home, having lost their first two away.

The Menace team news, when it landed, sprung a welcome surprise, heralding as it did the return of Peckham’s thirty goal threat up front. Josh Montella, despite having enjoyed plenty of starts for the Fisher first team, had found the love of his old side too much and had decided to come back. “If you love someone, set them free; if they return they’re yours” and all that.

Montella partnered Gabor upfront, ahead of centre mid and centre back pairings of Thomas and Kemp and Carrick and Egleton. On the left, Dowding played ahead of Meta at full back while on the right Matthews was the back half of an awes-ome, progressive looking partnership with Nieva. George Legg continued in goal.

The first ten minutes were all Peckham, who threatened initially down the left and then almost sprung the offside trap to release Montella in the second minute. Dowding and Montella were linking well in the early exchanges, before space was created for Matthews galloping forward on the right, his excellent cross just eluding the returning centre forward in the box. A minute later, Mathews again was involved, winning the ball at a canter and then starting a move that ended in Kemp shooting over from outside the area.

Chipstead then enjoyed a couple of opportunities, Legg coming out quickly to smother a dangerous through ball to Chipstead's number 11, before a moment later a cross/shot from the left flew wide of the far post.

In the main though it was Peckham who dominated possession and territory. Both Montella and Dowding saw cutbacks blocked after promising breaks into the box, before an excellent move in the 20th minute that involved good hold-up play from Montella and a wonderful cross field switch to Dowding on the left resulted in another Kemp shot going over. Nieva then showed his first glimpse of pace, cutting inside and beating a couple of defenders before seeing his shot kept out.

Chipstead still carried a threat though, and on 26 minutes broke upfield after a Peckham corner, the swift move resulting in a dangerous cross from the right - George Legg made a great save from a shot going back across goal in what was the game’s best chance at that point.

Peckham replied by getting back on the ball in the Chipstead half, and on 30 minutes a vicious Meta corner into the six yard box was scrambled clear, to be followed by great work from Nieva to find Montella on the edge of the box, only for the shot to go over.

The pattern of the half then had been the Menace largely dominating possession and territory, controlling midfield and looking creative on both flanks - thanks to attacking minded full backs and wide midfielders - with Montella helping provide a much livelier forward option than in previous games. It was thus against the run of play that the home side scored on the 38th minute, a shot from the left edge of the area flying in through a mass of bodies after a free kick from the right had initially been cleared.

Peckham looked to reply, and good work by the central midfield duo saw Thomas win the ball well before Kemp’s through ball was a whisker away from setting Montella clear. The half ended with a Chipstead player booked for a professional foul, stopping a promising Peckham break with a high tackle.

Peckham made a similarly strong start to the second half. Nieva beat his man on the right, moved inside and found Meta on the left, who moved into the area well but saw his shot saved. A few minutes later Meta’s cross from the left byline was almost met by Montella, while on 51 minutes an outrageous turn from Joe Thomas sent two Chipstead players for the Echo; sadly his quick ball over the top to release his forwards was wasted as both were standing offside admiring his skill.

This initial promise counted for little as on 55 minutes Chipstead doubled their lead, via an unchallenged header at the far post from a corner.

Thereafter, the game was marked by two highly curious decisions by the officials. The first saw just a single booking handed out to one of two Chipstead players who had run fifty yards to throw Mark Matthews to the floor after the latter had reacted to a studs-up challenge from his opposing winger. The second, and infinitely more bizarre, saw the referee give a drop ball to Chipstead after one of their number, lying on the floor in his penalty area, caught a shot aimed in his direction. The decision left away fans and officials alternately speechless and furious, but seemed to confirm that it was going to be one of those days when nothing goes your way - especially coming as it did just a minute after Montella had headed against the bar having connecting with a sumptuous cross from the left, the keeper gathering the rebound as the thwarted striker stared on in disbelief.

From there, the game was scrappy as Chipstead wasted time and Peckham tried in vain to turn things around. It wasn’t to be, and the Menace have now lost their opening four games to sit rock bottom of the league. The pressure is on to pick up the first points of the season in Monday’s game at home to Ide Hill, who currently sit third in the table. Menace life ain’t easy…