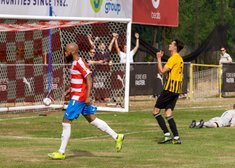 A crowd of 124 witnessed a Magical Joshua Montella performance at the Menace Arena as Peckham made it two wins in a row. Mary was again forced to start with yet another defensive line up, Kai Smith-Reason at right back, and Adam Carrick at left back, Ben Whittaker and Charlie Egleton the two centre halves. Nicky Meta returned to his more familiar winger role, as Camilo Andres Nieva rotated to the bench, despite a strong performance on Monday. The remaining personnel lined up the same as the last match.

It only took seven minutes for Joshua Montella to get his first shot away. Unfortunately for him he miss hit it, and it went wide and high of the far post. A minute later he would be feeling he should have done better as his second effort again went high over the bar. Nicky Meta sent in a perfect cross from the left by-line which found the unmarked Joshua Montella. He hit it on the volley with his favoured left foot, but he just couldn’t get his body over the ball, and it sailed over. He very rarely needs more than two or three chances to score, so surely it wouldn’t be too long?

Any early nerves from either team were beginning to fade, the game so far being end to end. Only the lack of finishing in the final third was missing. Nicky Meta had the best chance to open the scoring in the 13th minute, hitting the ball with his left boot hard and low, only to see an Otford defender block his effort on the 6 yard line.

However, as I said earlier, Joshua Montella only needs two or three chances to find the back of the net, so it was no surprise he opened the scoring in the 18th minute. Latching on to a through ball on the left hand side of the 18 yard box, he let fly with his left peg, hitting a real daisy cutter. The ball did, however bobble unkindly for the Otford keeper and nestled sweetly in the far corner. On balance, Peckham deserved the lead, as the visitors had yet to trouble George Legg so far.

The visitors were forced into two early substitutions, on 21 and 24 minutes, and then Mary was herself forced into making an early change on the half hour mark. Kieran Dowding again felt a tightening in his groin and was replaced by Camilo Andres Nieva. So many early changes can often affect the rhythm of the game, but thankfully this wasn’t the case for either side. Peckham had a couple of chances to extend the lead. David Gabor lost his marker just outside the 18 yard box, but sent his effort high over the bar.

Skipper Nicky Meta was then booked for an unfortunate handball. It was the cries of the Otford players that decided his fate and the official brought out his yellow card! As the game entered added time Peckham broke and Joshua Montella sent in a perfect cross from the left. Despite the Otford defender getting a slight touch with his head, the ball found the unmarked David Gabor at the back. He rose majestically to head the ball home, but somehow glanced it wide! Within a minute the visitors countered and thankfully George Legg wasn’t needed as the resulting shot went wide, a warning that this game was far from won!

After about 4 added minutes the official brought the first half to a close. Mary’s team talk would have been simple, more of the same, keep the ball and no silly mistakes. Whatever Mary said worked as within 17 seconds of the restart Peckham doubled their lead. The visitors kicked off and Peckham won the ball back in midfield almost immediately and pushed forward. The ball was played through the defence and found Joshua Montella who eased his defender away and struck the ball low to the advancing keepers right. A two goal lead doesn’t necessarily mean game over, so it was important that Mary’s team stayed switched on, and they did.

Within two minutes it was game over as the goal machine Joshua Montella bagged his hat-trick. Again beating the defender to the ball, for the third time he hit it low to the keepers right and the ball nestled in the back of the net to rapturous cheers and applause from the Menace faithful. Time now not to get too complacent and see the game out, Otford were certainly not going to go down without a fight.

George Legg was finally called into action saving well on 63 minutes despite the flag having been raised for offside. An important message there to stay switched on at all times. Mary then opted for a double change on 66 minutes, captain Nicky Meta was replaced by Emmanuel Thompson, the armband being passed to Adam Carrick, and David Gabor was replaced by Hamid Bangura. The objective was still clear as Peckham continued to play attacking football.

The chances were there but instead of taking them they were wasted. Awarded a free kick on the far side, some 20 yards out, it looked like it would be set piece from the training ground. It didn’t go to plan and Otford won the ball all to easily and cleared. As the halfway mark in the second half approached it was time for the goal hero Joshua Montella to make way for Darren Titre-Wilson. He left the field on 73 minutes to a very well deserved standing ovation.

The chances kept coming for Peckham, Emmanuel Thompson came close with a thunderous strike as the final ten minutes approached. Finding himself in space on the right, he opted to shoot when maybe a cross may have been the better option. The final change for Peckham came two minutes later, Festus Ogunlana entered the field on 81 minutes replacing the resilient Joe Thomas.

Time now to see the game out and preserve another clean sheet. Thankfully, Peckham had the crossbar to thank four minutes from time as Otford countered. With George Legg beaten, the woodwork did its job and with less than two additional minutes added the game was brought to a close, and the players and supporters celebrated the win.

This was a much deserved win, yet Mary will still see room for improvement amongst her squad. Onwards and upwards!! It would be unfair to end the report there without mentioning a very well deserved King of the Match, awarded to right back Kai Smith-Reason, well played.

Subs, Camilo Andres Nieva (on for Keiren Dowding), Emmanuel Thompson (on for Nicky Meta), Hamid Bangura (on for David Gabor), Darren Titre-Wilson (on for Joshua Montella) & Festus Ogunlana (on for Joe Thomas).