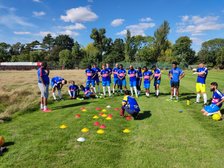 PECKHAM PERFORMANCE FIT FOR A KING

Football returned to some normality after last weekend's nationwide postponements due to the sad death of HM Queen Elizabeth II. The officials, players, coaching staff and supporters all observed a minute's silence prior to kick off to pay our respects to the passing of Her Majesty.

Mary had a match day squad of 16 which included two debutants, Nathan Gamester starting in goal for the unavailable George Legg, and Barbadian International Josef Tingey on the bench. Starting the game with the same back four, Adam Carrick at left back, Charlie Egleton partnered Ben Whittaker in the centre and Kai Smith-Reason was at right back. The only other changes from last week saw Camilo Andres Nieva replace the injured Kieran Dowding on the right wing, and Hamid Bangura started up front as David Gabor took his place on the bench.

Having last weekend off, it was important Peckham continued their recent good form, and they started well despite giving away an early free kick in a dangerous position. Thankfully the kick, taken some 25 yards from goal, wasn't struck particularly well and Nathan Gamester gathered the ball with ease.

Joshua Montella, eager to add to his goal tally after his hat-trick in the last outing, brought out a decent save from the Ten-Em-Bee keeper in the 14th minute. Within 5 minutes the ball was in the back of the net but it was his partner, Hamid Bangura that opened the scoring, as he looped the ball over the keeper from the far corner of the 18 yard box. Nineteen minutes played, a goal to the good and Peckham were in control.

It pretty much continued this way as Peckham piled the pressure on the visitors. Again however they gifted their opponents another free kick three minutes later. The kick, taken 20 yards out from the Peckham area on the near side, was again all too easy for the Menace stopper. Adam Carrick was unlucky not to double the lead after Peckham countered. He struck the ball sublimely from 30 yards, with the Ten-Em-Bee keeper beaten, the ball rebounded off the crossbar. It then fell to the onrushing Joshua Montella, but he couldn’t keep his shot down and he blazed it high over the goal!

As I said in my last report Joshua Montella only needs two or three chances to find the back of the net, so it was no surprise when he scored Peckham’s second of the game. Latching onto a through ball he managed to out pace the Ten-Em-Bee defender and fired the ball high into the top right hand corner of the goal, the keeper given no chance. So 28 minutes played Peckham were in control, the midfield were bossing the game, Jacob Kemp and Joe Thomas both doing their jobs winning the ball. When Ten-Em-Bee did attack, Mary’s back four stepped up and made some important tackles.

Again it was no surprise that Peckham nearly got their third goal on the half hour mark, and it was Charlie Egleton who was denied by a Ten-Em-Bee defender. Having picked up the ball just outside the Peckham 18 yard box, he carried it into midfield. After playing it forward Charlie Egleton saw an opportunity to join the attack and it almost paid off. The ball came back to him just outside Ten-Em-Bee’s area and he unleashed a powerful shot towards the goal, but the defender blocked it well.

Peckham continued to keep the pressure on for the rest of the first half, with both Nicky Meta and Camilo Andres Nieva causing problems for the visitors. As the game entered added time the visitors' heads had clearly dropped and they gave away a silly free kick in a dangerous position. Taken in the only added minute, the free kick was the last kick of the first half, the visitor’s wall did its job, and the referee called time.

So, another positive half time team talk for Mary, again it would have to be ‘more of the same’ keep the ball’ and ‘no silly mistakes’. Sounds simple to say, but players can sometimes become complacent and that’s where it can go wrong! So, with no changes in personnel the second half was underway and it didn’t take long to see the third goal of the game. Within two minutes of the restart Hamid Bangura notched his second of the game. Again, another perfect through ball from the midfield found the Peckham attacker. He shrugged off his defender, turned him one way, then another, and managed to get his shot away just inside the 18 yard box. He got just enough power on it despite the keeper getting his hands to it, the ball eventually found the top left hand corner of the goal.

Surely game over now, so important for Peckham to stay switched on, and they did and they continued to attack and play impressive football. The first booking came in the 49th minute when Nicky Meta was caught with a high boot. Despite the arguments, the Ten-Em-Bee player went in the book, and thankfully the Peckham skipper was ok to continue. Ten-Em-Bee countered in the 54th minute but thanks to the midfield maestro Joe Thomas, their attack was thwarted. The Peckham midfielder saw the imminent danger and ran from midfield to make a vital tackle just inside the area.

Adam Carrick again came close to scoring in the 57th minute from a corner, but he glanced his header just wide. Five minutes later it was time for a change, and Camilo Andres Nieva was replaced by Darren Titre-Wilson on 62 minutes. Centre midfielder Jacob Kemp came close on 67 minutes shooting just wide too.

The second change was made whilst the ball was out of play, and captain Nicky Meta gave his armband to Adam Carrick, and was replaced by debutant Josef Tingey. Both substitutes slotted in well and were already causing their opponents problems. Frustration was beginning to set in for Ten-Em-Bee and this was evident in the 73rd minute.

The opponents countered down the left wing but the assistant on the near side raised his flag for a tight offside. In his frustration the Ten-Em-Bee winger kicked the ball away, surely a yellow card. The official continued to blow his whistle and call the perpetrator over, in his frustration he continued to ignore the official, who then had no choice but to show him a red!
Advantage to Peckham surely, but sometimes playing against ten can be difficult, but the Menace kept their heads and continued to dominate the game. Time for a third change on 78 minutes as the double goal scorer Hamid Bangura made way for David Gabor. Within a minute Josef Tingey thought he’d made a dream debut as he rolled the ball into the empty net, only to be denied by a dubious offside flag. Two minutes later on 81 minutes Jacob Kemp blazed his shot high over the bar. In the 86th minute it should have been number four for Peckham as David Gabor picked up the ball 25 yards out, he weaved his way past two defenders but could hit the target when he had done all the hard work.

Peckham’s final change came two minutes from time as Tidi Barry replaced the other midfield maestro, Jacob Kemp. The game entered added time and there would still be at least five more minutes of drama to unfold. Adam Carrick picked up a bizarre yellow card, having seemingly made a fair challenge for the ball, the Ten-Em-Bee player continued with the ball for a further 5 yards then seemed to fall to the ground as he reached the by line. The assistant flagged, a free kick was awarded, and the Peckham left back went into the book. Thankfully the resulting free kick came to nothing, and the game finally came to an end. Still time for more drama after the whistle as another Ten-Em-Bee player went into the book as he made his way off the pitch and had clearly lost his cool.

So all in all another well deserved win for Mary’s team and again, some fantastic football was witnessed by the crowd of exactly 100. Every player out on the pitch today should feel proud of their performance. The midfield put in a shift and so did the back four. There were many candidates for the King of the Match award, but it was deservedly won by Joe Thomas. Hopefully the winning run continues into next week’s Cup game as well.