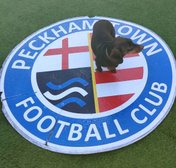 PECKHAM FRUSTRATED AS VILLAGERS HOLD ON

League action returned to The Menace Arena this week and Mary would be looking to her team to continue their recent run of good form. George Legg started in goal, Mark Matthews at right back, Charlie Egleton and Ben Whittaker in central defence and new signing Freeman Williams starting at left back. With Joe Thomas suspended and Jacob Kemp unavailable, Adam Carrick stepped into midfield to partner Tidi Barry in central midfield. captain Nicky Meta started on the left wing and the in form Camilo Andres Nieva on the right. Joshua Montella was again partnered up front by Hamid Bangura, with Darren Titre-Wilson, David Gabor and Festus Ogunlana on the bench.

With both teams looking to climb the table, it was no surprise that the nerves were showing from both sides in the opening five minutes. The visitors must have felt lucky not to have been down to ten men in the 7th minute as Peckham countered. Joshua Montella powered forward chasing down a through ball and it did look like the advancing keeper handled the ball outside his area as he made the clearance. The official however was unsighted, and waved play on much to the dismay of the Peckham players, bench and supporters alike. The visitors' objectives were clear early on as a late challenge left Camilo Andres Nieva requiring treatment on 9 minutes. The resulting free kick was wasted, which has been all too common this season.

Both teams began to find their confidence growing so it was no surprise that they were both beginning to play attacking football. Adam Carrick had adapted in his new role to make some important tackles and both Charlie Egleton and Ben Whittaker were holding strong in the centre of defence too.

Joshua Montella saw his effort go high over the bar on 17 minutes, he just couldn’t get his foot over the ball to keep it down. All the signs were there for Peckham, surely it would only be a matter of time before they got the opener. Debutant Freeman Williams had also started well, but found himself going into the officials book for a late challenge in the 20th minute.

It was clear that Peckham were beginning to frustrate their opponents as they began to give away a string of free kicks in dangerous positions. The first on 23 minutes was taken by Joshua Montella from the far corner of the 18 yard box. He hit it perfectly with his left and brought out a decent save from the Borden keeper. The ball fell to captain Nicky Meta but it came to him too fast and his shot sailed over.

Another free kick on 25 minutes, this time on the other side of the visitors' box was wasted as Nicky Meta opted for a short kick which the visitors cleared easily. The next on 27 minutes taken again by the captain by the near touch line was a decent effort. He lofted the ball deep into the visitors 6 yard box and as the keeper came out to punch the official saw an infringement and a free kick was awarded to Borden.

It was however the visitors that broke the deadlock somewhat against the run of play, just after the half hour mark. The goal came from a long throw into a packed Menace penalty area, the Borden no 11 out jumping two Peckham defenders headed the ball back out to the edge of the Menace area. It fell kindly to their number 23 who hit it on the volley with his left foot goal wards. George Legg despite being unsighted managed to get his fingertips to it but it wasn’t enough to keep it out.

So 32 minutes in, a goal down, Peckham’s heads could have easily dropped, but they didn’t and Mary’s players continued to search for the equaliser. Mark Matthews linked up well with Camilo Andres Nieva on the right wing but it was Tidi Barry that almost bagged the equaliser as the first half drew to a close. Freeman Williams found himself attacking down the left wing, he passed the ball inside to Nicky Meta who returned it with a sublime back heel. The left back sent in a low cross but Joshua Montella couldn’t connect, the ball deflecting into the path of of the incoming Tidi Barry. His effort crashed into the crossbar and down on to the goal line and away. Was it over, possibly, but with the speed that it happened, nobody could be certain.

So for the first time in five games Peckham went in at the break behind. Had they had gone in in front or level I’m sure Mary’s team talk would have remained the same either way. It would surely have been a case of keep playing the way you are, the goals will come, keep the ball and let the visitor do the work. So with no changes at half time, the second half was underway and we didn’t have to wait long for the chances to come for Peckham.

Peckham eventually got their reward on 53 minutes, again from another free kick. Joshua Montella sent in a high ball from the near side touchline from about 40 yards out. Adam Carrick rose well at the near post to head home, albeit it deflected off the visiting captain's head on the way in.

Honours even, and it was no more than Mary's team deserved and she immediately saw time for a change before the restart. Festus Ogunlana replaced Tidi Barry, having run himself ragged in the middle, left the field to a well deserved round of applause from the Menace faithful.

The visitors again began to vent out their frustrations on the Peckham players, but it was Mark Matthews that went into the book for retaliating on 64 minutes. A second change for Peckham three minutes later and it was time for Hamid Bangura to make way. A tough game for the Menace striker who hadn’t really put a foot wrong, but a tactical change was needed and on came David Gabor.

Camilo Andres Nieva was causing the Borden defence problems, but it was the visitors that now started to cause their own problems as they found themselves down to ten men as the referee had no option but to sin bin one of their players on 72 minutes.

Camilo Andres Nieva whipped a ball across the Borden six yard box after a short free kick seconds later and all it needed was a touch from any Peckham player and it was in. As Mary’s team pushed forward for the winner Adam Carrick fancied his chances to get his second from 25 yards but blazed his shot over. Peckham continued to put pressure on the ten men of Borden but the offside flag went up at every opportunity from the Borden assistant. It was of no surprise that the team were singing his praises in the changing rooms post-match.

Borden’s day went from bad to worse as their goal scorer, about to be substituted had obviously said something to upset the official, and was sent to the sin bin as he was leaving the pitch. This was just as the previous sin binned player had returned, so Borden were back down to ten players.

Peckham continued to pile forward but Borden continued to call the offside game to frustrate the hosts. With the 90 minutes up the game entered added time and there was certainly going to be quite a bit. Joshua Montella opted to shoot when maybe a cross was the better option and his effort went over in the fifth added minute.

It was however a moment of brilliance from a Borden defender that kept them in the game. Charlie Egleton looped a ball over the keeper and sent it goal bound. Darren Titre-Wilson charged towards to ball to power it home only for the defender to somehow clear it off the line with inches to spare.

From the resulting corner in the 8th added minute Charlie Egleton headed inches wide. The official finally drew the game to a close in the 10th added minute, and he was rightly given a round of applause as he left the pitch. A tricky game for him, considering he had no official assistants, he did extremely well under the circumstances.

A frustrating end for Mary’ team and for the 103 spectators inside the Menace Arena. Borden did well to soak up the Menace pressure, especially when reduced to ten men. It felt more like two points dropped, than a point gained, and there was certainly only one team celebrating the draw at the final whistle. However it is still a positive result, with Peckham now five games unbeaten, with four of these coming in the league. Still plenty of positives to take out of this game and into next week’s game near the Kent coast.